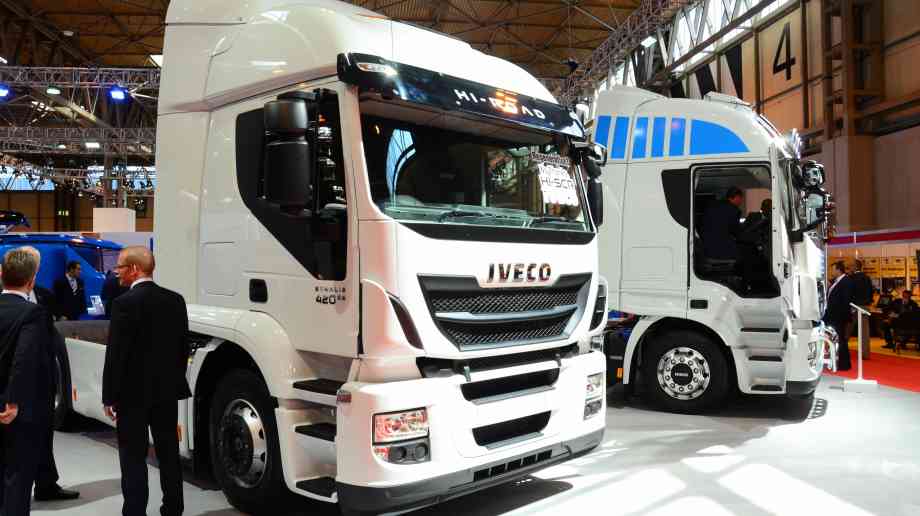 The shop window for CV buyers

The Commercial Vehicle Show will take place this April and will launch a number of new products over the course of three days. Government Business previews the show, including returning manufacturers and industry growth

With over 400 exhibitors signed up for the 2017 Commercial Vehicle Show, the halls are full to the brim at the UK’s premier road transport and logistics event, to be held at the NEC Birmingham from 25-27 April 2017. As the best attended, largest and the most comprehensive road transport and commercial vehicle event held in Britain, increasing demand for the annual event has resulted in man additional 5,000 square metres of space being made available in Hall 3 to meet the increased demand.

The Commercial Vehicle Show, providing truck and van operators with far greater choice than any other exhibition serving this vital industry, is the leading meeting place for suppliers and operators to network and learn, with many new products expected to be launched over the three days of the show. Unrivalled in size, product range and visitor attendance, the Commercial Vehicle Show attracted around 21,000 high quality visitors in 2016, many responsible for large purchasing decisions within their organisations.

Research at previous Commercial Vehicle Shows confirms that three out of four visitors to the CV Show is a fleet owner, senior manager or engineer, with most having sole or joint purchasing responsibility within their companies. Furthermore, over half of the show’s audience is exclusive to the CV Show as they choose not to attend any other industry exhibition, meaning access to thousands of key buyers for exhibitors that simply can’t be found at any other show. Commercial Vehicle Show director Rob Skelton has commented that changes in the commercial vehicle sector in the past year will be reflected at the show.

CVs driving growth
According to figures provided by the Society of Motor Manufacturers and Traders (SMMT), UK commercial vehicle manufacturing enjoyed double-digit growth in January. The figures show that 7,502 CVs were built in Britain during the first month of 2017, representing an increase of 10.8 per cent, as overseas demand continued to drive production. Additionally, exports grew by 45.9 per cent, counterbalancing a decline in domestic output, which fell -26.0 per cent.

Mike Hawes, chief executive of the SSMT, who help organise the CV Show, said: “CV production got off to a great start last month, following a relatively stable year for the sector. The strong performance was driven by continued overseas demand, with 96 per cent of all exported CVs heading for Europe. For this performance to continue, government must secure the competitive trading conditions that are so vital to the sector’s success.”

Vehicle manufacturers
Every aspect of the UK road transport sector will be covered at the Commercial Vehicle Show, offering business visitors the opportunity to see a wide variety of possible options to help them operate and maintain a safe, efficient and effective fleet. As well as vehicles, ancillary suppliers will offer products such as handling equipment, insurance, logistics, tyres, telematics, training providers, fuels and lubricants.

Vehicle manufacturers exhibiting at the 2017 Show include: DAF; MAN; Citroën UK; Fiat Professional; Ford; Isuzu UK; Iveco; LDV; Mitsubishi; Peugeot; Renault UK; SsangYong; Toyota; and Volkswagen. Many are planning new range additions and the Commercial Vehicle Show will be a chance for visitors to see them for the first time.

Volkswagen Commercial Vehicles will be attempting to gauge the UK’s appetite for its all-electric compact van. The German manufacturer’s stand will showcase its version of the urban delivery electric vehicle, the e-Load Up!, despite reports saying that the company has no intention to sell the vehicle in the UK. Powered by an AC electric motor, the vehicle offers up to 990 litres of cargo volume and a 360kg payload an day still attract enough attention to cause Volkswagen to change its mind.

Perhaps of more interest to its UK audience, the new Volkswagen Crafter will make its UK debut in Birmingham this April. The Crafter comes with a 2-litre TDI engine and a standard 6-speed manual transition gearbox, with the first UK deliveries of the model expected a month after the show.

Previewing its official launch, Isuzu will reveal the new generation D-Max at the show. In light of a growing and increasingly competitive market, with many fleets showing interest in the Nissan Navara and Toyota Hilux, among others, the Japanese manufacturer maintains that its customers are interested in a no-nonsense pick-up that's fit for purpose. Containing a number of feature upgrades and cosmetic touch ups, the new model has a range of touchscreen entertainment systems available on the interior, and rotary dials on the wheels that allow the driver to select four-wheel drive on the move as well as low range gears.

DAF Trucks will return to the NEC this year having recorded impressive annual registrations figures for 2016 and a record-breaking 30.1 per cent market share for the company. Overall registrations for 2016 increased by nearest 20 per cent on the previous year, totalling 13,911 registrations. DAF Trucks in-house finance division, PACCAR Financial, will also be present, showing DAF First Choice, its approved used programme.

Managing director Ray Ashworth attributed much of the company’s recent success to its ‘DAF Transport Efficiency’ philosophy, which will form much of the company’s showing at this year’s show. Close attention to operating costs, emphasised through the Silent Mode and Predictive Cruise Control on its models, combine to provide operators with a total transport solution, which will be highlighted on DAF Trucks’ stand this year.

Discussing the return of DAF, alongside the MAN TGE and Iveco, show director Rob Skelton, said: “We’re delighted to see DAF, MAN and Iveco via Guest Trucks returning to the CV Show in 2017. Heavy trucks are a vital part of the freight and logistics industry in the UK and their presence adds a real attraction to the Show, as well as giving the manufacturers the opportunity to connect with some of the key players across the haulage industry and demonstrate their products and services, all from one venue.”

Trailers and tankers
In addition to vehicle manufacturers, bodywork, trailer and tanker builders will use the Commercial Vehicle Show as their shop window. Among the exhibitors in this sector are: Cartwright Group; Don-Bur; Feldbinder UK; Kögel; Lawrence David; Maisonneuve; Magyar; Montracon; RTN Group; SDC Trailers; Tiger Trailers; and Whale Tankers.

The Commercial Vehicle Show will mark the 40th anniversary of Montracon, who will use the occasion to provide show debuts to three of its vehicles - a rigid bodied curtainsider on a 26 tonne DAF chassis, a double deck reefer and a more versatile machinery/plant carrier.

The Cool Pavilion in Hall 3a offers visitors a wide variety of temperature controlled products and services. Specialist trailer and bodybuilders including Chereau, Coolertech, Coolkit, Gray and Adams, Paneltex and Solomon Commercials have booked stands, and so have refrigeration equipment suppliers Carrier Transicold, Thermo King and Frigoblock.

Hall 3 has been opened for the 2017 show and will this year have the CV show Innovation Lab for the first time. Daily seminars will be held in this area covering a range of topics and latest developments in the commercial vehicle sector.

Operating costs are key for the commercial vehicle industry; fuel, maintenance, driver safety and communications all mean money and telematics can go a long way towards making every penny count for fleet operators. These systems can be tailored to companies of any size with vehicle tracking, tachograph analysis, fuel economy or a fully integrated package covering every area of operation.

Wearing the correct a-tyre
Tyres play a critical role in the success of any transport operation, with their importance to fleet safety and performance. Operators have the perfect opportunity to compare suppliers at this year’s show, with exhibitions including: Apollo; Bandvulc; Bridgestone; Michelin; RH Claydon; Continental; Double Coin; GITI Tire; Goodyear; Hankook; KwikFit; Sailun; TD Tyres; and TIA Wheels.

Making its show debut, Apollo Tyres will introduce its range of European market-orientated truck tyres. The company is building a truck tyre plant in Europe, being the first major tyre firm to do so for a decade. The Hungary-based base will work to bring European-produced Apollo truck tyres to the market in around 2019.

The April event will also see Michelin debut its all-new X Multi truck tyre line-up, with the manufacturer claiming that its next-generation fitments deliver 15-20 per cent more mileage, at no extra cost, when compared to its current X MultiWay 3D series. Initially available from April, additional tyre sizes will be made available throughout the year. Michelin will also be showcasing the breadth of its commercial vehicle tyre range at the show.

Putting efficiency and safety at the forefront of its operations, Continental Tyres will use the show to emphasise its operational solutions that complement its range of commercial vehicle tyres. A selection of the company’s tyres will be on display, with industry experts on hand to demonstrate its LGV, HGV and Materials Handling equipment ranges.

Mat Wilkinson, commercial sales and marketing director at Continental Tyres, said: “Commercial vehicle operators continue to strive towards greater fuel and cost efficiencies and with this in mind Continental has invested in providing not only market leading tyres but a robust range of services and solutions to support our customers throughout their operations. The CV Show offers us the opportunity to discuss how Continental can help, with the right tyres, and the right solutions to take your commercial business forward.”

A splash of electric
Mellor Coachcraft is set to showcase the Orion E, its fully low-floor electric minibus, at the Commercial Vehicle Show. With a full range of 100 miles, the Orion E accommodates 16 seated passengers or four wheelchairs, with the electric front-wheel-drive system enabling a single-step entry, fully low-floor passenger saloon.

With the first Orion E minibuses expected to be delivered to customers in July, comparisons are easily made with the Orion, the company’s conventional predecessor, with the Mellor maintaining much of the visual design. However, the low-floor, coach-built body accommodates its battery packs with the chassis cab holding an electric drive and gearbox in the engine bay.

John Randerson, Mellor’s managing director, said: “The project has taken us two years to complete. We looked at a number of different electromotive suppliers and products, with the aim of ensuring we could have absolute confidence in the product and drive train.”