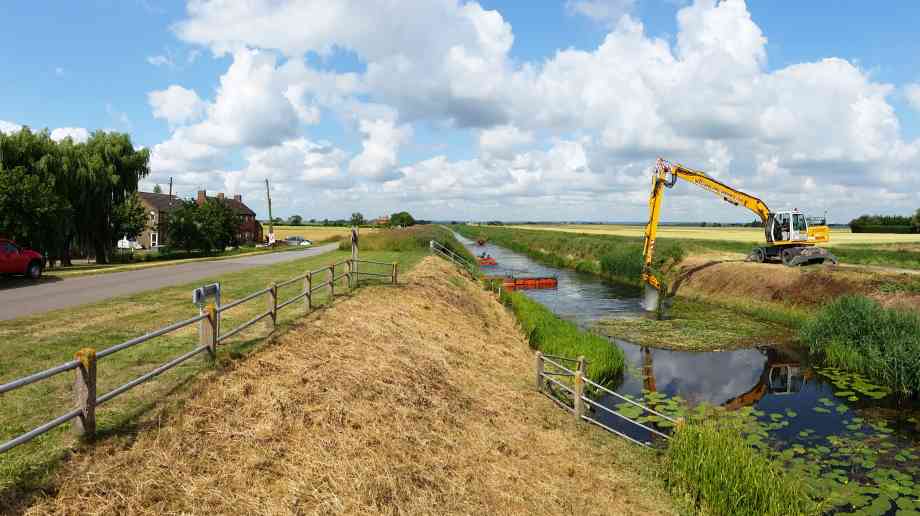 Do you know what an IDB is and do you have one managing the drainage and water levels in your area? On behalf of the ADA, Innes Thomson explains

Many of us live our lives supported by a wide range of acronyms. Whilst some of these are familiar, such as the NHS or the AA, most are quite alien outside of one’s direct sphere of influence, and frankly complete gobbledegook to the majority of people. Despite this, let me introduce you to one acronym that, at over 80 years old, has not only survived the tests of time, but is an increasingly important part of local public life given our changing climate. Yet it is one that few are aware of, that is unless, you pay rates to them for the wellbeing of seeing your local watercourses well maintained and managed.

I refer of course to our illustrious IDBs, or to give them their full name, Internal Drainage Boards. These are a type of local public authority serving areas where watercourses and land drainage infrastructure are collectively managed and maintained with the input of the local community. IDBs occur in those parts of England where there is a special need for land drainage, undertake work to reduce flood risk to people, property and infrastructure, and manage water levels for agricultural and environmental needs.

Most IDBs were established by the Land Drainage Act 1930, but their forerunners date right back to the 13th century when Henry III established a drainage commission to manage water levels on Romney Marsh in Kent. And on the interesting subject of history, we have recently come across Scotland’s one and only Drainage Commission still serving the Pow of Inchaffray, in Perthshire, whose origins date back to the Middle Ages, with a helping hand from Robert the Bruce along the way!

There is also a distinct Dutch influence in IDB history through Cornelius Vermuyden, a Dutch water engineer commissioned by the king in the 17th century to drain water and reclaim land from marshy tracts of the East of England. In doing so he did however nearly lose his head to Charles I, through the ‘treacherous’ act of destroying good hunting grounds. Thankfully today such grievances in water management can be resolved through a slightly more civil consultation process!

We also have other stories to tell. For example, the Black Sluice IDB that serves the Lincolnshire fens south of Boston, takes its names from a time when locals commoners, who did not appreciate water being controlled, tried on various occasions to burn down the then wooden sluice gates, hence the description ‘Black’ Sluice.

A tenth of England's land area
Today the water management role of IDBs remains vital, with 112 of them serving drainage districts that cover just under 10 per cent of England’s land area, representing about 1.2 million hectares. IDBs manage water levels in drainage districts and they either occur in broad open areas of lowland such as The Fens, Somerset Levels or the Humberhead Levels, or within the floodplains of rivers. The drainage district of each IDB is determined by the local hydrology and not by political boundaries such as those of counties.

In Wales there are a further 12 drainage districts, covering 28,500 hectares, each one with a local Advisory Group administered by Natural Resources Wales, and consisting of representatives of those land occupiers and local authorities who fund the local water level management work.

IDBs have a primary function to manage water levels and reduce the risk of flooding within their districts. Much of that work involves everyday management and maintenance of the watercourses, streams, rivers and ditches they control and collectively, IDBs operate over 22,000km of watercourse and over 500 pumping stations. IDBs are not responsible for any Main Rivers which flow through their districts, with that responsibility falling to the Environment Agency.

IDBs are defined as Risk Management Authorities within the Flood & Water Management Act 2010 working alongside the Environment Agency, local authorities and water companies to actively manage and reduce the risk of flooding. Their activities and responsibilities are principally governed by the Land Drainage Act 1991 that enables them to raise funds, undertake works, and regulate obstructions in watercourses amongst other things.

Whilst operating as independent local authorities in their own right, IDBs do not and cannot work alone. They depend on a close network of other authorities and partners working together to provide a joined-up approach to managing water within their respective wider river catchments. You will often hear the term ‘partnership working’ referred to by those involved in flood risk management to invoke greater cooperation between these various expert partners.

IDBs are very much part of that, through PSCAs, another acronym that stands for ‘Public Sector Co-operation Agreements’. Using PSCAs, IDBs can collaborate with the Environment Agency and local authorities to undertake works on one another’s behalf. This is enabling greater efficiencies, allowing the best equipped and most local operator to undertake works. For this reason, increasingly you will see the machinery of local IDBs maintaining the embankments along more major rivers and estuaries on behalf of the Environment Agency.

The local nature of IDB operations means that all of their employees and contractors have excellent working knowledge of the rivers and in turn have extensive knowledge of not only the hydraulics of that area, but also its environment, its social fabric and the business interests creating the local economic well-being of that area. That knowledge has often been built up over many years and the passing on of that knowledge from older to younger employee is an integral part of IDB family life today. IDBs also maintain careful records of their work and unlike larger authorities who cannot efficiently maintain archives, many of those records go back to the creation of the IDB.

The Environment Bill
Of considerable interest to IDBs are the plans in the forthcoming Environment Bill to modernise their funding rules. A positive consequence of this will be that for the first time in over a generation, new IDBs may be able to be formed, or existing districts expanded wherever this is local supported. Thus, sharing the excellent environmental custodianship that IDBs are already able to provide in the current areas that they work.

The governance and funding of IDBs is different to other local authorities, but very effective and with clear governance guidance in place, the mix of direct landowner/ratepayer and local authority representation on an IDB’s Board, local decision making and priority setting is strong and democratic.

Collectively, IDBs invest over £65 million annually in managing water levels and reducing flood risk. These costs are predominantly funded by the local beneficiaries of the water level management work they provide. Each IDB sets a budget for its planned work in the forthcoming year and any investments it needs to make for future projects. Section 36 of the Land Drainage Act 1991 determines that these expenses of an IDB shall be met by: drainage rates collected from agricultural land and buildings within the internal drainage district; special levies issued on District and Unitary Authorities within the internal drainage district; and contributions from the Environment Agency, known as high land water contributions. 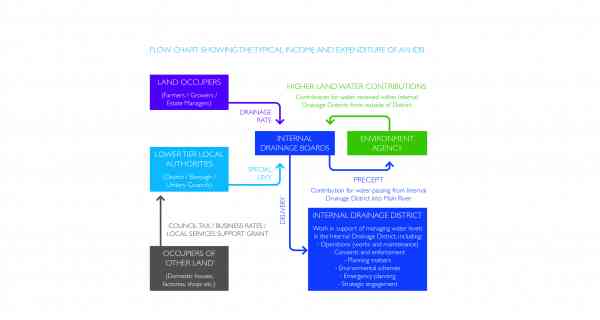 All land and properties within a Drainage District are deemed to derive benefits from the activities of an IDB and are classed as either agricultural land and buildings or ‘Other land’. Occupiers of ‘Other Land’ pay Council Tax to the District or Unitary Authority, who are then charged a Special levy by the IDB in proportion to the annual value of the other land. Until the 1980s this was collected directly by the IDBs from ratepayers but in the interests of efficiency, local authorities took over the collection and passing on of these rates to the relevant IDBs. IDBs still make direct rate demands to the owners and tenants of agricultural land and buildings.

As a result of development, IDBs are earning a greater proportion of their income from Special Levy payments. In those cases where this represents a majority of an IDB’s funding, the Board members appointed by Local Councils will have a plus one majority on an IDB’s board.

Because of their history and evolution, there are sometimes rather unfair and outdated opinions still circulating about IDBs but the fact is that, because of their local knowledge and focus on delivery of work on the ground, they are agile, efficient and effective examples of local public service working often behind the scenes alongside the larger authorities and agencies, and able to take some of the pressure off them. But they need support and recognition for the work they do and it is very reassuring to see Defra’s increasing interest in the work of IDBs. More dialog is still needed with MHCLG, especially around matters of local planning and development control that again, IDBs could more greatly assist with under the right conditions.

I wonder what the history books will say about IDBs in 2720 or will we all have disappeared beneath the waves by then?