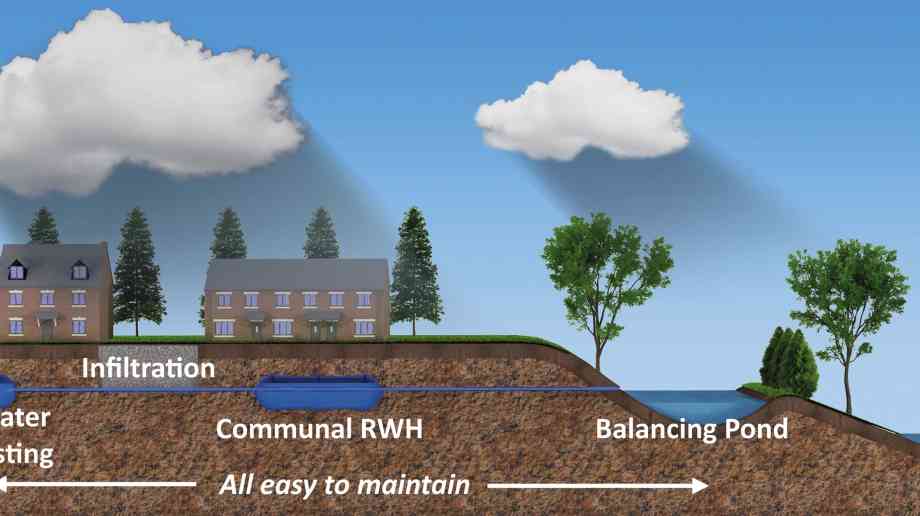 Getting to grips with managing rainfall

There are many ways in which flood damage can be mitigated. Kevin Reed, of the UK Rainwater Management Association, discusses how better water management could stop problems reoccurring in the future.

There are mixed views on the likely impact of global warming on climate change, but if the last few years are a guide, then these changes certainly need to be given serious consideration.

According to current forecasts, the UK should be anticipating a progressive drift towards wetter winters and drier summers, leading typically to the floods we have witnessed in 2015/16, and the water shortages in much of the south of England in 2012.
Interestingly, according to the latest report of the International Panel on Climate Change (IPCC), it is the water shortage side of the equation that is forecast to inflict most economic damage on the UK.

This can be explained by the Environment Agency forecasts on the likely impact of changing weather patterns on summer and winter river levels; although at first glance the wetter winter, drier summer trends appear to hold good, closer inspection shows that even in winter river levels in much of central and south-east England, will in future be lower, even in winter.

Allied to already existing stresses on water-supplies throughout much of England south of the Humber estuary, and forecast population growth of c20-million over the next 30-years, future water shortages can be anticipated with confidence.

Bad news for farming
Water-dependent industries such as the agricultural sector will be particularly hard-hit by these changes, and quite soon according to Environment Agency. Shortage of water is already an issue in the south-east of England, the footprint of which will spread quite rapidly even within the next few years.

With river levels falling, ground-water supplies diminishing, and a limit to the effectiveness of water-efficient farming methods, this could potential lead to a bleak future for much of the UK’s agricultural sector, a great irony given that other parts of the country will be coping with the damaging impacts of seasonal floods.

Horse before the cart
For the time-being the UK seems to be pre‑occupied with the ‘flood’ side of the rainfall management equation, understandably given the distress that flood events cause.

However, this preoccupation could easily lead to unintended consequences if the measure being taken to ameliorate floods have consequences which exacerbate later water shortages.

All concerned need to turn this equation around, by looking first at what needs to be done to assure future water supplies, then adding the additional measures required to avoid floods.

Agriculture is a very good example of what this would look like in practice, the only certainty of future supply being retention of winter rainfall for summer use. This is a practice already employed on many farms short of water, a practice that will need to become much more widespread if Environment Agency predictions are to be heeded.

A fortunate by-product of storing water in this way is that the water being stored can be removed from the flood side of the equation, thereby adjusting the manner, method and cost of down-stream flood defences. Only a very slight, and virtually cost-free, extension of simply storing water for agricultural purposes would be to use the reservoirs/ponds concerned as attenuation devices.

This would mean that rather than simply filling them to overflowing, a set proportion of their contents would be allowed to leave at a controlled rate with which down-stream waterways can cope.

This would maintain capacity for the next rainfall event, giving an even more dramatic effect on the design and cost of flood defences down-stream, as it would help to manage peak flows.

Town and about
Similar principles are already employed extensively in the urban environment where it has long been a planning requirement that new developments do not add to the downstream flood risk; with 20-million more people to accommodate and employ, the additional housing and commercial premises required will accentuate this requirement.

However, these additional people and their places of work will inevitably place a further strain on already stressed water supplies, something that therefore also needs to be taken into account when attenuating rainwater to avoid flood risks. As with the countryside, any water taken out of the flood side of the equation, by retaining it for re-use as a non‑potable water supply for toilet-flushing, clothes‑washing and garden irrigation, helps to reduce the cost and complexity of the attenuation aspects of the overall system.In an ideal world, designers should be aiming to specify combined attenuation/water re-use systems that produce water‑quality, environmental and amenity benefits at no greater life-cycle costs than would be required to tackle flooding risks alone, when all factors are taken into account.

How it works
What this looks like in practice is best illustrated by taking a housing development example, although exactly the same principles apply to other building projects. As shown schematically, it is best practice to control as much water at source as possible, leading on a single dwelling to the surface water, other than rain falling on the roof, being retained on the plot by a combination of natural infiltration into the ground, permeable hard‑standings and, if needed, by incorporation of a property enhancing garden water features.

These features alone would be unlikely to be able to manage the rain falling on the roof, which is traditionally simply fed to underground soak-aways. Where the ground is insufficiently permeable to make this an effective solution, the water is temporarily stored underground instead, then released at a managed rate that downstream infrastructure can handle without causing a flood risk.

Adding an automatic pump and non-potable distribution pipe‑work to the equation, so the water can be re-used – thus saving scarce mains-water, adds very little cost which can be compensated by savings made on mains-water consumption. On a housing development with a mixture of low and high-density housing, any rainwater surplus to the requirements of individual larger properties can be diverted to provide an additional source of supply to higher density properties, where the consumption of non‑potable water exceeds the harvesting potential of their roofs.

Taking roof water out of the equation at these two levels minimises the amount surplus to re-use requirements, in turn reducing the land‑take needing to be diverted to the balancing ponds/swales, needed to complete the site-wide surface water management system.

Insofar as new commercial developments are concerned, the above is well-recognised best practice which aligns well with corporate environmental policies, reduces companys’ water bills, and even contributes a few BREEAM points to the project.

On housing developments, however, the lack of clear drivers make progress less certain.

In the absence of prescriptive or coercive legislation, housebuilders are naturally reluctant to add costs to their projects which do not translate into higher asking prices, and the benefits of which, in the form of lower water bills, does not return to them.

This is quite different to the German experience, for example, where a combination of much higher water prices and favourable legislation make water re‑use a basic requirement in all new homes.

The underlying issue in the UK is that future water shortages are not currently seen as an issue; this is reflected by the recently issued national Sustainable Drainage Systems (SuDS) Standard which makes no mention of the link between water re-use and flood avoidance.

This contrasts starkly with the Welsh government’s SuDS Standard and the Greater London Authority draft SuDS Action Plan, both of which identify water re-use as the number-one method of flood avoidance.

And what needs to happen
At some point the failure to give adequate recognition to future water supply issues will be recognised, most probably when a couple of drought events make it a political imperative. However, tackling water shortage issues cannot wait until the problem actually arises, as it will take time to build-up the water re-use capacities needed to help address the predicted future risks.

The problem is compounded by current structural arrangements which result in a wide range of organisations and bodies with ‘flood management’ in their remit, and hardly any (if any at all) tasked to address droughts; however, that is not an argument to establish some new drought management organisations, rather for the existing bodies to embrace water-supply and drought avoidance issues in their flood avoidance remits.

Floods and droughts are two sides of the rainfall management equation, both of which need to be borne in mind when tackling either.

Assuring future water supplies for a growing population, agriculture, industry, and the environment is an essential top priority which, when tackled, will have a direct impact on the management of flood risks. The worst of all worlds would be to tackle floods in ways that do nothing to alleviate droughts, or even exacerbate them.

Hopefully, the enlightenment to managing rainfall already shown by the Welsh government and the Greater London Authority will become contagious nationally, before it is too late to rectify today’s oversight. L

Kevin Reed is National Specification Manager at Graf UK, a director of the UK Rainwater Management Association, and deputy chairman of the WATEF water re-use and surface water management committee.