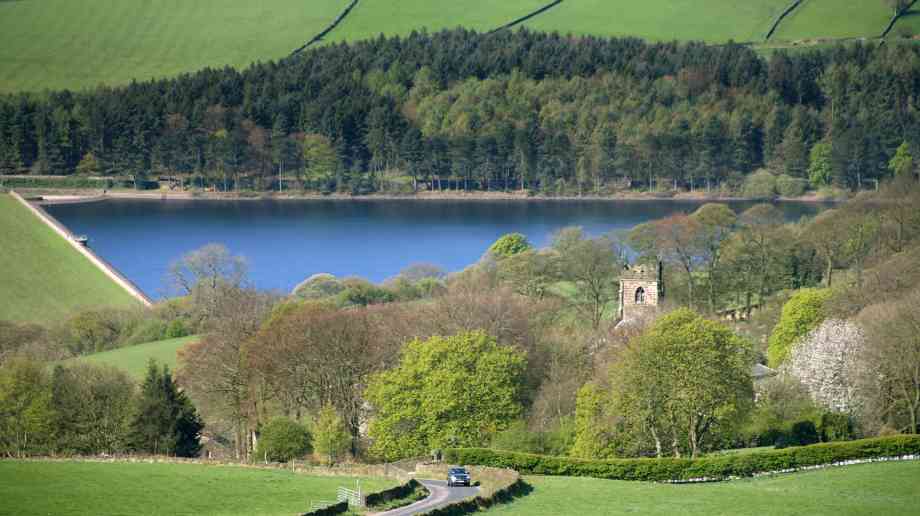 Floods during the winter of 2015-16 devastated communities across England. In the 15 months that have followed, a number of councils have stretched their resources and finances, embraced innovation and ensured that their communities are more flood resilient. Here, in our first Top 10 list, Government Business looks at the Top 10 local authorities for flood resilience

1 – Sheffield City Council
In November 2016, Sheffield was selected as the first core city in England to be protected from flooding to the same standard as London by 2021. Offering great potential for improving flood protection from its many rivers whilst enabling regeneration of the urban environment, Sheffield was one of a number of regions that experienced severe flooding in 2007, with damage affecting homes and businesses.

Councillor Bryan Lodge, cabinet member for the Environment, has also suggested that the innovative measures could open up new avenues for the city’s energy usage.

He said: “We don’t just want to protect the city from flooding – through this work, along with your valuable contribution we have ambitions to find solutions that not only transform Sheffield’s waterways but also possibly generate electricity.” 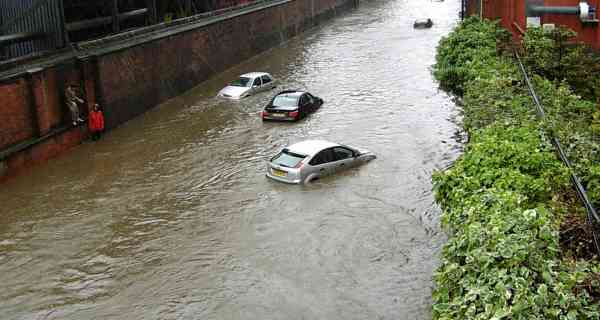 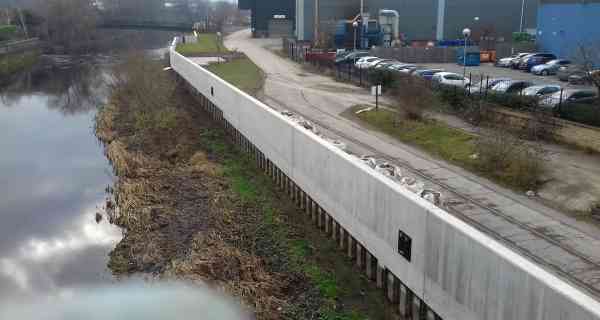 2 – Stroud District Council
The Stroud Rural Sustainable Drainage System (RSuDS) development is a natural flood management system that works to reduce any risk of flooding in the Five Valleys, and is an innovative venture that other council’s across the UK are trying to copy. It is a network of low impact natural anti‑flooding techniques that works to restrict the progress of water through a catchment by making the landscape more difficult for water to flow through. All structures provide great habitat for wildlife, reduce the amount of silt travelling downstream and slow the rate at which floods travel down the valleys, lowering the peak water height.

Set up in response to repeated flood damage after the extensive downpours of 2007, the pioneering work has recently been recognised by the River Restoration Centre, who have nominated Stroud District Council, alongside the Environment Agency and Gloucestershire Wildlife Trust (GWT), as a finalist for the 2017 UK River Prize.

3 – Exeter City Council/Devon County Council - Exeter Flood Defence Scheme
The £32 million Exeter flood defence scheme project, managed by the Environment Agency with support from project partners Exeter City Council and Devon County Council, will reduce flood risk to more than 3,000 homes and businesses in Exeter. Exeter has a long history of flooding, going back as far as the 1286, according to historian records, with its current defences not updated since the 1970s. Studies carried out by the Environment Agency indicated that, despite effective flood defences in the past, more extreme flooding could leave the current scheme unable to protect vulnerable parts of the city.

The Trew’s flood relief channel and the side spill weir at the top of the channel have been lowered over the last few years, since Phase 1 of the project began in 2014. This increased the flow capacity of the flood relief channel, which will help reduce flood risk during high river flows. The check weir at the downstream end of the flood relief channel was removed in 2016 to increase capacity further. Further works to Quayside and Bonhay Road have been undertaken, including installing temporary defences, while flood defences around Quay Bridge will be put in place during winter 2017.

4 – Northumberland County Council
The Morpeth Flood Alleviation Scheme was named Project of the Year at the 2016 Constructing Excellence Awards. The £26 million pound scheme, a joint project between Northumberland County Council and the Environment Agency, includes upstream storage and urban flood defences, and is reported to have prevented hundreds of properties from flooding in the winter of 2015 when the dam operated for the first time.

The innovative scheme combines in town defences with an upstream storage area which has capacity to store 1.4 million cubic metres of water – enough to fill 560 Olympic sized swimming pools.

Councillor Ian Swithenbank, the council’s cabinet member for Local Services, said of the award: “This was a great example of agencies working together on a hugely ambitious engineering project. The real key to this scheme has been the work with the community, and their input and engagement has been absolutely invaluable. The fact the scheme has already been called into action shows its value to Morpeth residents. We’re delighted the scheme has won this prestigious award.” 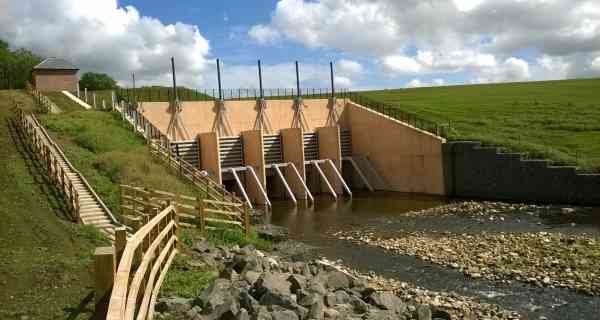 5 – Bath & North East Somerset Council/ Chew Magna Parish Council
Despite having two main watercourses flowing through the village, the conservation status of Chew Magna means that normal flood protection schemes are not necessarily possible, so its parish council collaborated with Bath & North East Somerset Council and the Environment Agency to risk assess and protect the properties most at risk.

Following localised flooding in 2012, a team neighbourhood flood wardens were established to oversee the ten zones outlined in the area and to develop a Flood Plan. When Storm Angus hit at the end of 2016, the importance of individual and community support was highlighted in the speed at which the local community responded to the flooding, emphasising the strength of the communities flood resilience.

Liz Richardson, cabinet member for Homes and Planning, said: “It is important that individuals and communities are prepared to manage their flood risk in order to be more resilient to the impacts of flooding. What the community has achieved in Chew Magna is a fantastic demonstration of what can be accomplished when local people work together with conviction in order to deal with a real and present risk that affects the whole community.”

6 – Cumbria County Council
Floods during the winter of 2015-16 devastated communities across the North West of England, nowhere more so than in Cumbria. The county has the highest land and highest rainfall in England - making it little surprise that flood events are frequent. In the winter of 2015, three complete river systems – the Eden, the Derwent and the Kent – flooded simultaneously, impacting over 6,000 homes and businesses across Kendal, Carlisle, Appleby, Keswick and Cockermouth, as well as dozens of outlying villages.

In the wake of Storm Desmond, Environment Secretary Liz Truss set up the Cumbrian Floods Partnership to analyse how defences can be improved in the communities hit by record rainfall. Floods Minister Thérèse Coffey, who published the Cumbria Flood Action Plan following the 2015 flooding, announced £4 million of funding in November 2016 to repair and improve Cumbria’s tourist trails following the flooding in the region. It is reported that £150 million was spent across the county last year to get communities back on their feet - inspecting and improving flood defences, installing new flood prevention schemes, upgrading drainage systems, restructuring bridges and walls.

2017 will see a total of £72 million invested to better protect at least 4,300 homes by 2021, which the Environment Agency says will pave the way for a new approach to protecting homes, businesses and the local economy against flooding. This will be achieved through five main areas: strengthening defences; upstream management; maintenance; resilience; and water level management boards. 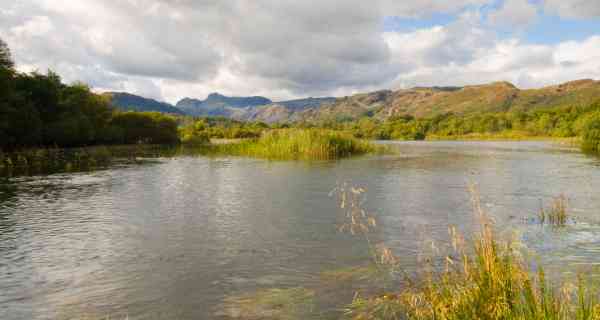 During the winter of 2013/14, over 900 homes and businesses in Tonbridge, Maidstone, Yalding, East Peckham and other smaller communities were flooded from the River Medway and its tributaries, representing the largest ever flood measured in many parts of the catchment of the River Medway. In February 2017, the government announced Local Growth Funding of £4.635 million towards the Medway Flood Storage Area Project, which will include much needed improvements to the Leigh Flood Storage Area. An online flood storage reservoir, it was built in 1982 following the devastating 1968 floods and reduces the flood risk to 965 properties and 300 businesses in the town of Tonbridge from the river Medway.

8 – Denbighshire County Council
Denbighshire’s West Rhyl Coastal Defence Phase 3 project was crowned winner of the Building Project of the Year award at the British Construction Industry Awards in October 2016. The scheme aims to upgrade previous defences to provide more protection for the town against flooding. The work, which was completed in October, consists of enhancements to the town’s existing promenade with improved public realm, pedestrian and cycle routes and the construction of primary and secondary flood defence walls.

Carried out with Welsh Government funding, improving flood defences across the county is one of the key priorities for Denbighshire County Council, who value enhancing flood protection for the coastal community in Rhyl high on its agenda.

The local authority and Natural Resources Wales are continuing to analyse the ways to better mitigate the risk to life and property of flooding from ‘main’ rivers, including operational measures such as regular inspections of culverts and gulley emptying.

The five-year Werrington Brook Improvement programme began in 2015, with the latest phase of the programme, in February 2017, seeing the number of meanders in Marholm Brook increased, with the brook’s banks re-shaped and berms, pools and riffles introduced as features. As well as increasing flood resilience, from changing the way the brook flows, to increasing the amount of oxygen in the water, the features will help to clean the water, create new habitats, and provide a more pleasant space for all to enjoy.

10 – Glasgow City Council
In 2016, the Glasgow City Region City Deal Cabinet directed £3.17 million of funding towards the next stage of the delivery of the £46 million Metropolitan Glasgow Strategic Drainage Plan (MGSDP). The MGSDP was formed to tackle the deficiencies in Glasgow’s drainage system, will reduce the risk of flooding for more than 7,000 existing properties and over 30km of roads, delivering an annual £2.3million reduction in average damages and a drainage capacity of 4,747 litres per second.

The green-blue infrastructure will support regeneration through flood mitigation, enhanced climate change resilience and unlocked development potential. It will also release over 1.33million square metres of land for housing development.