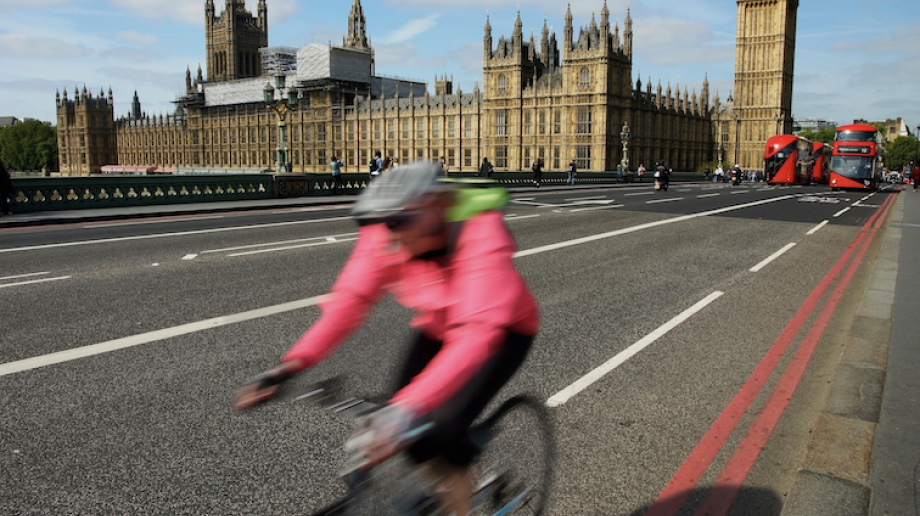 Building on London’s great progress in cycling, walking and wheeling

The nation’s capital has seen a transformation in cycling and walking infrastructure during the past two decades, showing what can be done when there is vision and political will both within City Hall and the boroughs. James Cleeton, London Director for Sustrans sets out his priorities for building on the city’s active travel achievements so far

To say I’m new in post is a bit of a misnomer as I held it on an interim basis for six months beforehand, and have been with Sustrans since 2012, so have seen at first hand the difference that active travel can make to communities in London and beyond.

The city is ever evolving, not just in its skyline but also on the ground with former industrial stretches of riverside path opening up for walking and cycling, due to redevelopment. But as the pandemic lockdowns showed, change can also come quickly.

Before 2020 there were 76 School Streets in the capital. Since then, Transport for London’s Healthy Streets Officers (HSOs) programme delivered by Sustrans and London Boroughs has helped increase this collectively to over 500, with our HSO team working on 318 of them.

Helping schools implement longer-term switchable trips – swapping car journeys for active travel like walking, wheeling and cycling – is also part of the programme. This contributes to TfL’s STARs programme for (Sustainable Travel: Active, Responsible, Safe), which since starting in 2007 has replaced more than 22 million kilometres of car journeys with active travel.

TfL’s finances were hit hard by the pandemic lockdowns, with their resultant drop in fares. The financial challenges faced by TfL are substantial and well documented, but as traffic congestion continues to cost London’s economy £5.1 billion a year, or £1,211 per driver, measures to facilitate walking, and cycling remain vital to help make neighbourhoods healthier and happier. This is why working with London Boroughs to build on the achievements of the Healthy Streets Officers programme, and offering continued support to them is my first priority as London Director of Sustrans.

School Streets ambitions
In an ideal world, we’d like to see double the number of School Streets, and double the length of separated cycleways and filtered streets, as part of an ambitious walking, wheeling and cycling programme for the most disadvantaged residents of the capital. This would include spending 20-30 per cent of regional and local government walking, wheeling and cycling budgets on enabling people with the skills, confidence, equipment and information they need to walk, wheel and cycle.

The Mayor of London has an ambitious transport strategy, which sets the target for 80 per cent of all trips to be made on foot, by cycle or using public transport by 2041. This will take a major, long-term step change in how as a society we view getting from A to B within a world city. It is an opportunity for more and more people to experience the benefits of active travel. But people only change how they get about when it feels safe, comfortable, convenient and easy.

Initiatives to show people how active travel can transform and improve their surroundings, such as School Streets, are an essential introduction to changing assumptions about having to live with constant traffic and pollution.

In the longer term our public realm and streets can be reimagined to prioritise people over traffic flow. And then we need to support people to take the first steps towards active travel for their local journeys.

Needless to say, change like this is not easy.  But when we make active travel possible for everyone, we can tackle climate change, air pollution and the huge health crisis. And by doing so we also make neighbourhoods places that people want to live and work.

In the meantime, however, there are plenty of challenges facing existing cycling and walking infrastructure in London. Barriers on cycle paths may have been put up years ago by local authorities and other landowners, sometimes as a condition of planning permission, and often with the intention of keeping motorcyclists or 4x4s out. The reality today is that they can prevent easy access to the path by people who use trikes, trailers, tandems, cargo bikes, prams, wheelchairs, and mobility scooters, and in some cases exclude them entirely. Ideally you’d just like to go out there with an angle grinder and take them all out, but as with the reasons for their installation in the first place, it’s never that simple. Ultimately, it’s about making sure active travel in London is for everyone – this is another of my key priorities.

Volunteer network
Sustrans has a network of volunteers to audit barriers on the National Cycle Network (NCN) in London, with a view to removing them. When we have taken away barriers for trial periods elsewhere in the country, there were no examples of motorcyclists or 4x4s taking advantage.

Sustrans has supported several great projects in London during the past two years that show the practical benefits of active travel for everyone, such as e-cargo bikes for charities like the King’s Church food redistribution centre in Catford, Lewisham, which conducts food bank deliveries. The Inclusive Cycle Hub at Inwood Park, Hounslow, provides adapted bikes, safety wear and sessions with instructors for residents with learning and physical disabilities aged 10 and over.

Many participants had experienced long periods of isolation, with poor mental health, or shielding, and would not have normally had access to side-by-side cycles, tricycles, or ones with wheelchair platforms attached. All report back how much healthier and happier this experience of active travel makes them feel. Smaller scale initiatives like these can not only improve people’s quality of life locally, but taken together across London can add up to making a significant difference for communities. These are another priority for me.

The Covid-19 pandemic has clearly shown the need to make London’s streets better for walking, cycling, and wheeling so everyone can move around safely. I look forward to leading Sustrans in London and to using our charitable resources for the benefit of those who need them most.