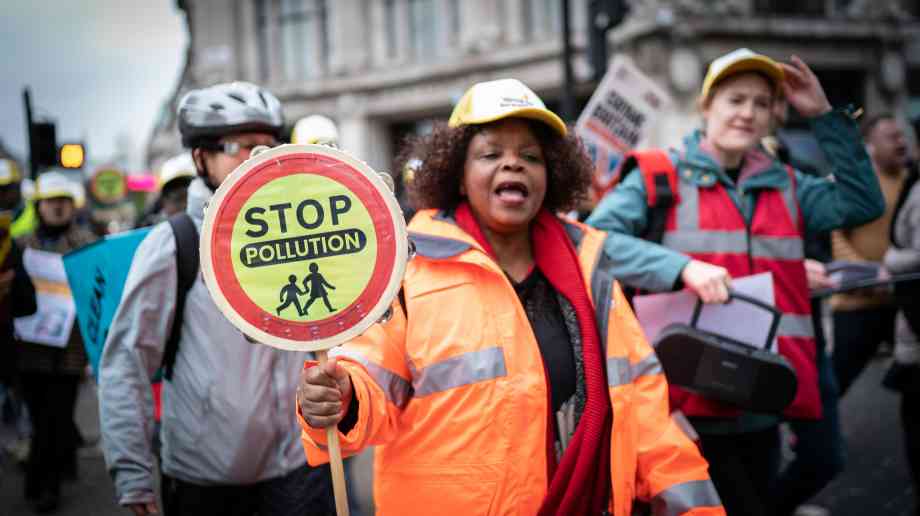 In a country with world-leading emissions data and new technologies coming onto the market to help employers measure and monitor air pollutants, there is no excuse for inaction, says Matthew Holder, Head of Campaigns at the British Safety Council

Air pollution, linked up to 36,000 early deaths a year in the UK, has been recognised by the government agency Public Health England as the biggest environmental risk to public health. Research from King’s College London suggests that more than 9,400 people die prematurely due to poor air quality in London alone. Ambient air pollution is linked to cancer, lung and heart disease, type-2 diabetes, infertility and early dementia. 7.8 per cent of lung cancers in the UK are attributable to this type of exposure. The cost of diseases and conditions associated with air pollution is estimated at over £20 billion.

Outdoor workers are one of the most vulnerable professional groups in relation to air pollution. They spend their working lives close to city traffic and pollution-emitting machinery. The World Health Organisation and the International Agency for Research on Cancer (IARC) confirm that the health of outdoor workers is more at risk simply because they work in the ambient environment and are therefore exposed to higher levels of pollutants over the long-term.

Outdoor workers play a crucial role in the economy. They help us cross the road, fill potholes, guard our children, deliver our food or maintain the infrastructure of our cities and towns so that we can have clean water, electricity, Wi-Fi or cycle lanes. Yet, very little has been done to help protect them from air pollution.  Neither regulators or employers have committed themselves to monitoring outdoor workers’ exposure to air pollution and measuring its effects on their health.

In January 2019, Andy Slaughter MP, on behalf of the British Safety Council, asked a Parliamentary Question about how the Health and Safety Executive (HSE) regulates the exposure of outdoor workers to ambient air pollution. Sarah Newton MP answered that HSE does not regulate ambient air pollution and has no plans to research its links to workers’ health. Again, in May 2019, Paul Farrelly, Labour MP, asked the Secretary of State for Environment, Food and Rural Affairs, whether he plans to ensure that ambient air pollution is treated as an occupational health issue and adopt a workplace exposure limit for diesel engine exhaust emissions. Again, the answers were negative.

Time to Breathe
In response to this situation, the British Safety Council launched the Time to Breathe campaign to draw attention to what needs to be done now to reduce workers’ exposure and to reduce emissions. In a world’s first, the campaign also launched Canairy, a free mobile app designed to protect outdoor workers that links occupation to pollution exposure. The British Safety Council has worked with experts at King’s College London’s Environmental Research Group to produce the app.

Canairy draws on some of the most advanced technology in the world that tracks pollution emissions, It is certainly the case that in the UK only London, with its London Air Quality Network (LAQN), has this level of detailed information. The app works by drawing on the LAQN data as well as advanced emissions modelling by King’s and combines this with the user’s GPS to calculate an individual’s exposure to pollution on an hourly basis.

At the heart of Canairy is a desire to use this technology and information to reduce people’s long-term exposure to air pollution. For the workplace, this means providing employers with insights about the exposure of their workforce – and insights require lots of data – to make organisational change. As such, all the exposure data collected by Canairy on the four main pollutants – nitrogen dioxide, particulate matter (PM2.5 and PM10) and ozone – is anonymised and stored in a database that can be freely used to inform change in the workplace.

Importantly, this exposure data relates to a specific employer’s workers and can be used to implement control measures. They will be specific to the nature of the work and sector but can include recommendations on how employers can schedule outdoor work to avoid the worst levels of toxic air or implement physical changes to the way how the work is carried out – for example barriers for work around traffic. It might even mean changing work environment, for example closing roads to reduce pollution in and around schools or others work sites.

Canairy also has an educational function for outdoor workers and their employers. It contains a number of tips and information about pollution and how to reduce a user’s exposure to it, for example taking breaks away from traffic and reducing strenuous activity during high pollution episodes. The app also has a built-in notification system to alert users if exposure exceeds World Health Organisation’s limits and directs people to these tips.

As well as encouraging employers to use Canairy and show their commitment to sustainability, the British Safety Council is calling on its members, as well as other organisations and individuals to write to their local MPs asking them to contact both Secretaries of State for DWP and Defra to call for change.

In particular, we are urging them to request: the government to immediately recognise exposure to ambient air pollution as an occupational health hazard; the government to invest in improved pollution monitoring across the UK. Reducing exposure requires detailed pollution measurements and all UK regions have the right to the same accuracy in emissions data as London; the UK to adopt the World Health Organisation’s (WHO) exposure guidelines for nitrogen dioxide, particulate matter (PM2.5 and PM10) and ozone; and employers to act to both reduce the exposure of their staff and to minimise their companies’ emissions of pollution.

The charity has also supported the #AirWeShare campaign of the environmental charity Hubbub, which recently conducted a trial monitoring air pollution exposure of people working or living in London. The findings of the trial again demonstrated that outdoor workers are particularly affected by air pollution. For example, the site engineer at a construction site had air pollution exposure levels six times higher than that of the office worker. Of all the trial participants, the lorry driver had the highest overall exposure.

The British Safety Council hopes that these initiatives will help to reinforce a recognition that ambient air pollution is an area of workplace responsibility. This would be key in triggering a change in attitudes and the level of commitment to the issue of both regulators and employers of outdoor workers.

There is no time to lose. Employers should stop burying their heads in the sand, look at the data Canairy is capturing and take action. Waiting to see if the government and the regulators are going to act, risks another asbestos dead-end: failing to act on the health science, endless misery and picking up a huge bill.