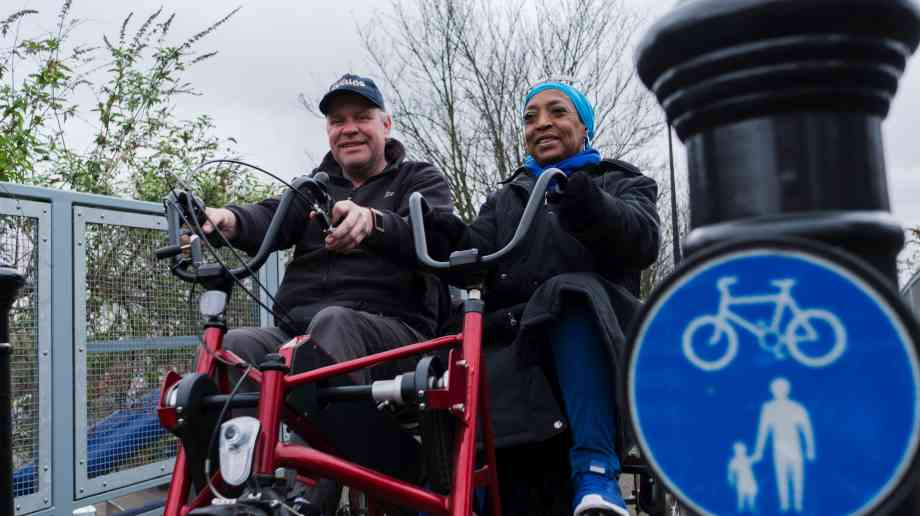 An inclusive transport system is central to a fairer economy and society. However, all too often urban transport is biased and unequal, writes Tim Burns, Senior Policy Advisor at Sustrans

Cycling has the potential to play a crucial role in increasing accessibility and freedom of movement, especially in urban areas where most journeys are shorter in length. However, cycling hasn’t been an easy option for most people in the UK. Only those brave enough to share road space with motor traffic will consider cycling.

The government recognised the benefits of active travel with the adoption of the Cycling and Walking Investment Strategy (CWIS) in 2017, which set out their ambition to make cycling and walking the natural choice for shorter, local journeys, or as part of longer journeys, by 2040. The CWIS sets out aims and targets for 2025, including doubling cycling activity from the 0.8 billion cycle stages made in 2013 to 1.6 billion in 2025.

However, it is becoming increasingly clear that these targets are unlikely to be met without greater investment and delivery of cycling infrastructure in cities and towns across England. Department for Transport’s own commissioned research predicts that based on current policy only a third of the 800 million hoped-for extra cycling trips will be achieved by 2025.

Facing multiple challenges from air quality, climate change and low levels of physical activity, not to mention just the ability to keep our cities moving as the population continues to rise, we need to urgently invest more in cycling. This investment also needs to prioritise making cycling inclusive. Our efforts so far have tended to focus on links into the city centre and in better off areas where existing numbers of people who cycle are greatest. These quick wins are important in showing the role cycling can play, but now we need to focus on everyone.

Inclusive cycling key to CWIS success
Our report with Arup highlights that whilst numerous barriers to cycling exist amongst , women, disabled people and people aged 65 and over, there’s a huge demand amongst those groups to start cycling.

Data from Bike Life, the largest assessment of cycling in cities, found only seven per cent of disabled people currently cycle once a week or more (in comparison to 19 per cent for non-disabled people). Yet one in three (33 per cent) disabled people would like to start cycling, a figure higher than the average population (30 per cent). Looking at cities better designed for cycling, we can reach the same conclusions – more than 25 per cent of commutes by disabled people in Cambridge are cycled.

The Department for Transport’s (DfT) recent consultation on the Cycling and Walking Investment Strategy: Safety Review had over 14,000 submissions. Of these, however only five per cent were from people who considered themselves to be disabled and 24 per cent from women – hardy a representative sample. Is the purpose of reviewing cycling and walking safety to understand the needs of people who already cycle or those that don’t because it is perceived to be too scary?

Interestingly when it came to cycling our research found similar barriers and solutions for women, disabled people and older people. Whilst barriers in cycling may be more profound for certain demographic groups, such as disabled people, they typically affect most people.

Paving the way for inclusive cycling
Local and national governments must ensure disabled people are properly represented in transport planning and decision making, including cycling. Only 6.25 per cent of senior transport positions in Scotland, where data exists, are held by women, whilst only one per cent of MPs in Westminster are disabled. Ignoring the views of women, disabled people, and other groups will have a profound impact on the perception of policy makers and planners towards their needs.

Secondly, and most importantly, we need to invest in safe, physically protected infrastructure for cycling. This needs to link up to form a dense network of routes as opposed to the one or two routes into the city centre we typically see today in our major cities. Building routes into and within the city centre is likely to increase the numbers of people cycling but focus on the needs of white middle-class men as opposed to groups that may find it harder to access education, jobs and services, including disabled people.

We need to focus our efforts on helping to reduce the economic and health inequalities typically found in all UK cities and towns. Disabled people are more than twice as likely to be unemployed as non-disabled people and along with older people and women, are typically less physically active.

Finally, we must do more to support people to access adapted or electric cycles and cargo bikes that we found significant demand for alongside concerns over their cost and security. Extending the UK Motability scheme to offer support for cycles that would be a mobility aid to disabled people would be a good starting point alongside existing support to lease a car, scooter or powered wheelchairs. The Cycle to Work scheme should be extended to help people purchase a cycle beyond the workplace – people who are retired cannot access this scheme and more women and disabled people are likely to be unemployed or not in work. It is encouraging to see some cities are beginning to innovate in this area. Cardiff is trialling adapted cycles in their existing bike share scheme, and the Scottish Government offers a loan scheme to anyone living in Scotland access an electric cycle.

Inclusive cycling is about social justice
We believe the UK can achieve big social changes in this respect – but we need political commitment, ambition and courage to design and deliver cities and towns that prioritise all people, regardless of their background, over cars and this starts with investment and policies that make cycling inclusive.

Cycling currently receives £314 million of ring-fenced investment, or up to £1.2 million of funding that ‘may’ be spent on walking and cycling from 2016-2021. DfT estimates that investment in cycling and walking yields on average £5.50 of benefits for every £1 invested. That is a significantly higher benefit-to-cost ratio than many large road and rail schemes, which tend to have benefit-to-cost ratios of between £1.50 to £1 and £2 to £1.

The evidence speaks for itself and city and town leaders are awakening to the desire and need to prioritise people over cars in their neighbourhoods and centres. However, to do so they need funding. We urge the UK government to increase investment in walking and cycling in England to 10 per cent of the transport budget in the next spending round (2020/1-2024-5) and to prioritise this investment in redesigning our cities to make walking and cycling inclusive and streets that prioritise people.