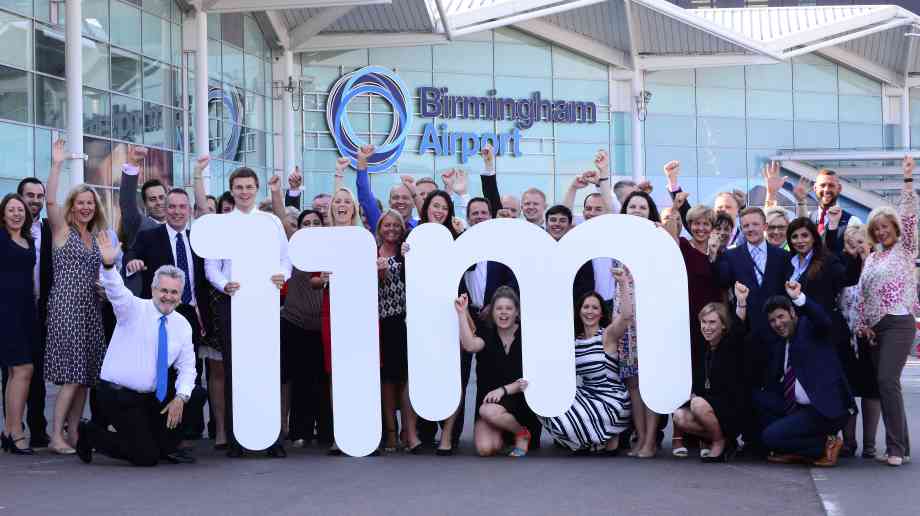 Conferencing where the world meets

Named as the UK’s most popular conference and events destination outside London by the British Meetings and Events Industry Survey 2015/16, Meet Birmingham explain why the region is the ideal location for all your conferencing and events needs

More people are discovering Birmingham than ever before. The city attracted a record 38.1 million visitors last year, with an all-time high of 1.1 million visits from overseas – including the largest increase in global business guests for any UK destination outside London.

Birmingham is one of Europe’s most popular conference destinations, thanks to its location at the heart of the UK’s motorway and rail network, offering unparalleled connectivity. Air, rail and road links connect the region to more than 400 million people across Europe, with over half of the UK population lying within two hours and 90 per cent within a four-hour travel time. The volume and variety of the city’s conference spaces, its ability to accommodate large and small events with ease and a lifestyle offering, which includes more Michelin star restaurants than any UK city outside of London, a jam-packed festivals calendar and world-class shopping, make it an event organiser’s dream.

As a result, Birmingham continues to pick up accolades in the business tourism sector. The city was recently named top UK regional destination for conferences and events by international meetings specialist Cvent. It also maintained its status as the preferred destination outside London for the seventh successive year in the annual British Meetings & Events Industry Survey (BMEIS).

Emma Gray, director of marketing and communications at Meet Birmingham, the city’s official business tourism programme, said: “Birmingham has established itself as a welcoming and respected events destination for local, national and international organisers, highlighted by recent high rankings in influential, industry-wide surveys. To build on this success, the city has invested on unprecedented scale to further improve its infrastructure and connectivity for business tourism visitors. Many landmark developments – such as New Street station – have come to fruition in 2015.

“As global competition to attract business and leisure tourists remains fierce, we have been actively promoting Birmingham more widely than ever before, targeting markets with large numbers of potential visitors, from Germany, China and India.

“Events play a vital role in the city’s visitor economy, which hit an all-time high of £6.2 billion in 2015. By launching new spaces including the Vox Conference Centre and accommodation providers such as Park Regis – we’re ensuring we remain attractive to this valuable market.”

Birmingham – an evolving landscape
The Greater Birmingham region is experiencing one of the most exciting periods of regeneration and development in recent times, with numerous further investment opportunities still ahead. World-class schemes, projects and masterplans are set to cement the region’s reputation as the engine of the UK economy.

Almost £1 billion of major developments in Greater Birmingham are now complete and powering the region to compete on a global scale. These include the new £600 million New Street station, which relaunched in September 2015, creating a truly world-class transport hub and giving visitors a bigger, better, brighter and lighter welcome. The £127 million Midland Metro extension between Birmingham’s Snow Hill and New Street stations has revolutionised the way people travel to and around the city, with trams running into the heart of the city centre for the first time in more than 60 years.

Birmingham Airport is experiencing record passenger growth, with 11 million passengers using the airport in the last year and long-haul traffic growing by 26 per cent annually. This growth is partly due to the launch of 13 new airlines, including Qatar Airways and American Airlines, as well as more capacity delivered by Emirates, Air India and Turkish Airlines. A £300 million investment to extend the runway and redevelop the terminal to welcome the A380 mean that Birmingham is the premier long-haul airport for the UK’s central region.

The arrival of HS2 will bring easy, high speed travel between Birmingham and London to millions of people. It will also act as a major catalyst to transform the wider region, creating over 100,000 jobs and adding £14 billion to the economy, thanks in part to the world-class stations planned at Curzon Street in Birmingham city centre and UK Central in Solihull.

Together with improved connectivity, last year also saw the culmination of an exciting retail renaissance in Birmingham, including the new £150 million premium shopping and dining destination Grand Central, home to one of the biggest John Lewis department stores in the UK and more than 60 other shops and restaurants. There has also been the multi-million pound makeovers of luxury retail and leisure destination The Mailbox and one of the city’s most distinctive landmarks, Selfridges.

Boost to Birmingham’s business tourism offer
Over the past 12 months, Birmingham’s appeal to event delegates has continued to be enhanced thanks to a number of new and refurbished developments.

October 2015 saw the arrival of the prestigious Vox Conference Centre, the latest addition to an established range of NEC Group venues. Vox features five fully flexible suites and three spacious boardrooms, which can accommodate all types of event, from a small meeting or seminar to a banquet for 850 or a conference for 900 delegates. The venue is located within the new £150 million Resorts World Birmingham complex – a first for Europe – at the NEC site, which also includes a Genting casino, outlet shopping, restaurants and an 11-screen cinema.

International hotel brand Park Regis can now call Europe home with the opening of its Birmingham property in March. The modern hotel offers 253 deluxe rooms and the largest presidential suite in Birmingham. There is an executive level with conference and meeting spaces, plus two fine dining restaurants – including Rofuto, set high in the city skyline with 360 degree views.

Offering 650 sq m of contemporary and highly flexible event space with capacity for 350 delegates seated, Warwick Conferences’ new £5.3 million dedicated meeting venue on the University of Warwick campus opens this Autumn. It will be available on an exclusive use basis so it can be customised to meet individual needs.

Boutique hotel Malmaison chose Birmingham as the first city to launch its new meetings and events space, Work + Play, in May, which includes six rooms catering from two to over 120 people, four touch-down ‘pods’ for meetings of up to four people, and a breakout lounge.

Newcastle-based hospitality company The Cairn Group have started a multi-million pound development of their property on the corner of Birmingham’s Smallbrook Queensway and Hill Street. The first phase, to be completed in October, will include 20 additional bedrooms to the existing Holiday Inn Birmingham City Centre, a state-of-the-art conference and events centre with 24 flexible meeting rooms and six event suites, plus a high street bar, Starbucks and heated terrace.

Elsewhere, Birmingham’s Royal Angus hotel is set for a two-storey extension to increase its number of bedrooms from 133 to 226; the University of Birmingham plans to build a 172-bedroom hotel and event space known as the Hornton Grange Hotel and Conference Centre, to be open by summer 2018; and AC Hotel Birmingham city centre, with 90 bedrooms, made its UK debut beside the city’s canals at the Mailbox in the spring.

Inspiring settings
For a city as diverse as Birmingham, it is only right that event organisers have a range of venues and spaces at their disposal. Meet Birmingham, the city’s business tourism programme, works with well over 200 partners – including academic, cultural, sporting and heritage venues.

Birmingham’s Genting Arena will play host to the most eagerly-anticipated awards night on this year’s sporting calendar, BBC Sports Personality of the Year 2016, in December. The event returns to the city after six years, with Leicester City’s fairytale Premier League win, the Rio Olympics and Andy Murray’s Wimbledon triumph all expected to feature prominently.

Birmingham’s accommodation sector breaks spring record
Birmingham’s hotels posted average occupancy rates of 75 per cent between March and May 2016 – the best results for spring since current records began in 2003, according to data from the Marketing Birmingham Regional Observatory.

Events contributing to the seasonal growth in Birmingham’s accommodation sector included the All England Badminton Championships at the Barclaycard Arena, the British Small Animal Veterinary Association (BSAVA) – which helped April’s average occupancy to jump six per cent compared with the same month last year – and the Royal College of Ophthalmologists (RCOphth) Annual Congress.

Emma Gray adds: “With a 17 per cent growth in domestic tourists since 2010, and the largest increase of international guests outside London in the last two years, Birmingham is welcoming more visitors than ever. It’s therefore encouraging to see the city’s rising popularity being mirrored by strong figures within its hotel sector.

“While a host of new brands have recently chosen to launch in Birmingham, there are a further 14 hotels – amounting to more than 2,000 bedrooms – in the pipeline, demonstrating the confidence that investors currently hold in Birmingham’s visitor economy and tourism offer.”

Meet Birmingham
Meet Birmingham showcases the city’s strength as a host for events, conference and exhibitions and provides event organisers with a comprehensive range of planning and support services.

The city last year relaunched its events support package for organisers and delegates. Named The Birmingham Welcome, the package provides industry professionals with the necessary tools – including venue location, hotel information and social programme planning – to deliver a successful event in the city. Meanwhile, the Birmingham Ambassadors programme encourages professionals and academics across the West Midlands to champion their region and their own work by hosting their organisation’s next conference in Greater Birmingham.

Emma Gray, concludes: “We are encouraging more event organisers to experience Birmingham’s offer, with a particular focus on hosting more events linked to the region’s sectoral strengths, in areas such as advanced engineering and life sciences.”