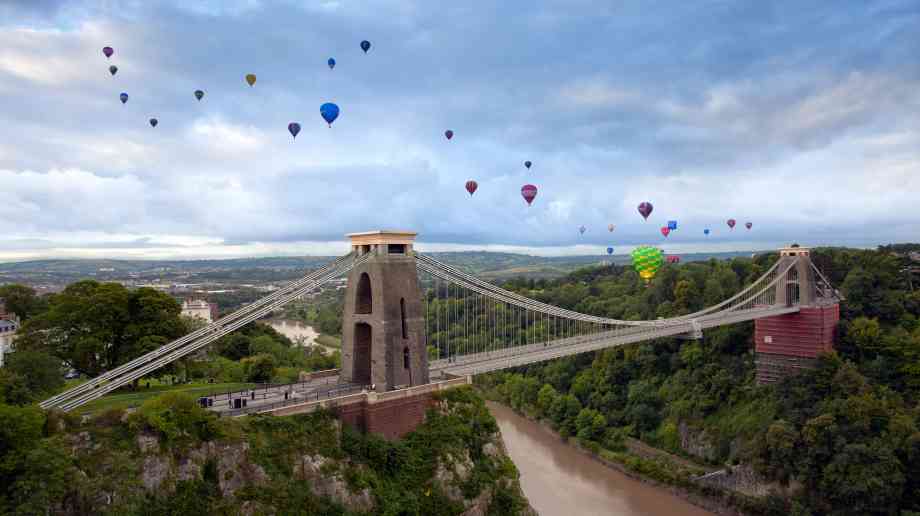 Innovative, sustainable and creative … Bristol delivers all three factors and more in a vibrant city where business and leisure collide in one accessible package. Destination Bristol gives a guided tour

‘Cool, classy and supremely creative’ was how the Sunday Times summed up the city when its annual lifestyle report named Bristol the UK’s ‘best place to live’ for 2017. The article that made the announcement waxed lyrical about Bristol’s ‘extraordinary culture’, its spirit of collaboration and streak of independence - all things that make it a brilliant a place for visitors too.

The keynotes of Bristol’s tourism offer are Brunel, Banksy, hot air balloons and bendy characters (think Bristol-born Wallace and Gromit), but the South West’s largest city is as big on business events as it is on festivals and fun. Bristol is one of the UK’s leading MICE destinations and it is growing in popularity, showing a 15 per cent increase in the number of conferences taking place in 2016 than in 2015 – itself a record breaking year when Bristol enjoyed the international spotlight as European Green Capital. Bristol became a hub for sustainable events including the International Fairtrade Towns Convention which came to the UK for the first time. There was an increase of 20 per cent in event days and more than 2.2 million delegates over the course of the year.

A significant amount of investment has come to both new and established venues and there are plans for more in the future, with over 1,000 additional bedrooms being added in the next couple of years and exciting new event spaces that will be truly unique – a word that is bandied around far too often in the industry, but Bristol is full of genuine one offs.

The city has an independent and unorthodox spirit which is embraced by venues and reflected in the types of activities available for delegates. This is a city where the top team-building activities include craft beer and food trails, boat trips, street-art tours, a chance to climb the rigging on an historic ship, model-making with Oscar-winning animators, and spray-can workshops with graffiti artists.

Well connected
For the business events and association industry, access is everything and Bristol’s location and connections to the UK and beyond make it an appealing choice. Located on the River Avon, close to the junction where the M4 meets the M5, Bristol is well-placed for easy travel from London, Birmingham, South Wales or further into the West Country – all within a two-hour journey. There are two mainline stations: Bristol Temple Meads in the city centre, and Bristol Parkway to the north, both served by fast intercity trains, most of them running every 30 minutes from London Paddington, Cardiff or Birmingham New Street. For conference delegates, Destination Bristol has negotiated an exclusive deal on GWR rail fares – offering significant savings on advance rail tickets valid for travel from all main GWR stations.

Bristol Airport’s operates flights and connections to 30 countries and 122 destinations, including domestic flights to Newcastle, Belfast, Glasgow, Edinburgh, Aberdeen and Inverness. To meet demand, the airport is continually up-grading, with the most recent development being a £24 million West Terminal expansion and a new security facility. Earlier this year, Hampton by Hilton opened Bristol’s first on-airport hotel. Upon landing at the airport, it is not unusual to be through to collect bags and out of the door within 30 minutes, meaning you can be in the city centre and checked in within an hour of landing. Once in the city, it’s easy to get around. Arrive at Bristol Temple Meads station and you can hop on one of the distinctive yellow ferry boats which serve the Floating Harbour.

Kathryn Davis, Destination Bristol’s head of Tourism, says: “Like many major cities, traffic can be an issue around commuting times so the benefit of the ‘walkable’ city is huge. For larger events, this allows the use of multiple hotels around the main event venue meaning that a range of accommodation budgets can be taken into account. It also means we can be creative about plenary sessions and breakout space – even if they are in different buildings it can take less time to move between them than in some large convention centres.”

What Bristol does best
One of the city’s USPs is the variety of its venues, ranging from major hotel brands to truly unique spaces – like the Grade II* listed Arnos Vale Cemetery. The area is also blessed with world-class venues such as Brunel’s iconic SS Great Britain and the new Aerospace Bristol, an aeronautic museum which features Concorde 216, the last to fly. Both are engineering marvels, both the fastest way to cross the Atlantic in their time, and both designed and built in Bristol; back permanently in their original birthplaces.

Bristol’s venue portfolio was transformed in 2016 when the new Ashton Gate Stadium was completed. The largest event space in the South West of England, Ashton Gate has all the sophistication of a top-class convention centre located next to a pitch that is home to both Bristol City Football Club and Bristol Rugby Club. The flexibility of the space offers many opportunities for combining exhibitions, conferences and break out spaces or allows for multiple events on one site.

There are a number of new venue spaces coming in 2017 and 2018, including the aforementioned Aerospace Bristol, together with new spaces at St Georges Bristol, one of the city’s most iconic concert halls, and Bristol Old Vic, the oldest continuously working theatre in the UK. Both of these enhance the creative cultural DNA that runs through the city.

Nowhere is this more evident than at Watershed, the beating heart of Bristol culture and the home of some of the most exciting events, including major film festivals. As well as waterside meeting space, Watershed offers state-of-the-art cinema that can be utilised for presentations along with private hire for screening or gaming.

Film is a rich part of Bristol’s heritage, with both TV and cinema being critical to the local economy. Classic TV productions (Sherlock and Dr Who among others) complement new productions coming to the city all the time. While their studios are closed to the public, the multi award-winning Aardman Animations has created a very special model making workshop for delegates as a way to engage in team building. You can also do behind the scenes tours of BBC Bristol, home to the world-class Natural History Unit.

Business confidence is growing in the city and this is reflected in numerous developments and upgrades. The Mercure Bristol Grand Hotel has been transformed from a traditional hotel into a celebration of urban creativity with pieces of art commissioned from local street artists adorning both public areas and bedrooms.

The Avon Gorge Hotel – which has unrivalled views of Brunel’s famous Clifton Suspension Bridge - is in the process of a major transformation that includes all 77 bedrooms, bars and event space. There has been major investment in the Doubletree by Hilton Bristol North, formerly the Hilton Hotel, located on the outskirts of the city. Bristol’s newest hotel, the Harbour Hotel & Spa, which opened in early 2017, offers a combination of boutique bedrooms and its stunning event space, the impressive Sansovino Hall.

About Destination Bristol
Winners of the mia-List 2016 Team of the Year award, the conference team at Destination Bristol offers event organisers a very special set of services to help them bring their event to the city from raising the original bidding document to arranging site visits and suggesting full programmes. These convention-bureau services can support large events set over a number of days, one-off conferences or small meetings in Bristol and the surrounding area.

Kathryn Davis explains: ‘Our team have all come from the industry, either as venue or event professionals, so have years of experience in conference and business event organisation. They can check the availability of more than 70 venues in the Bristol region, only canvassing those that fit client specifications. At no cost, they can quickly deliver a proposal outlining available locations and budget.’

As well as running an impartial venue finding service for meeting and conference rooms, the team can also find and negotiate bedroom bookings for groups and conference delegates. This can be as simple as a block booking at a negotiated rate to a complex allocation across a number of properties. When it comes to these more complex solutions, they can reserve accommodation and manage delegate room bookings online.

Lifestyle Offering
Bristol’s top spot in the Sunday Times’ ‘Best Place to Live’ survey followed a host of media accolades which put Bristol on top both nationally and internationally. The Rough Guide, for example, named Bristol as one of the world’s top 10 must-dos for 2017 – the only UK destination in their city hot-list.

Rough Guide described Bristol as ‘a shining example of one of the UK’s most forward-thinking, innovative and dynamic small cities’, and this growing perception is supported its first-rate music scene, incredible street art, charming pubs and ‘classic landmarks’ like the Clifton Suspension Bridge.

In an attractive waterside setting along the banks of the River Avon and the Floating Harbour, this maritime city may well be small, but it offers a huge variety of quality museums, galleries, events, festivals, heritage and family attractions, as well great shopping and one of the most exciting foodie scenes anywhere in the country.

According to Observer food columnist Jay Rayner: ‘Bristol really has become one of the most interesting restaurant cities in England.’

1) Bristol and Brunel go together like bread and butter – and in 2018, the SS Great Britain opens a Being Brunel, a museum dedicated to the life of the great Victorian engineer.
2) The annual Balloon Fiesta in August is the largest event of its kind in Europe with over 130 balloons taking off twice a day for three days.
3) Founded in 1766, the Bristol Old Vic is the oldest continually running theatre in the country.
4) Aardman Animation’s bendy character, Morph celebrates his 40th birthday in 2017.
5) Bristol was the first choice for the first Ivy Brasserie outside London.
6) Bristol rocks: As the birthplace of pioneering bands Massive Attack and Roni Size, Bristol is a centre of musical innovation.