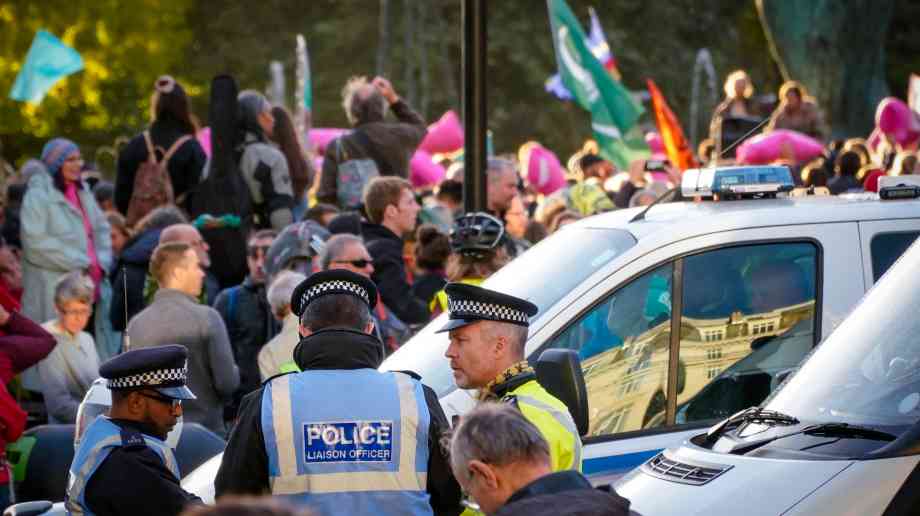 Non-violent protests have been a prominent feature of 2019, with demonstrators calling for the declaration of a climate emergency, the delivery of Brexit and even expressing their displeasure at the arrival of President Trump. While preserving freedom of speech and legitimate protest is of course imperative, attention must be paid to how both policing and protecting protests impacts increasingly-stretched police budgets.

Indeed, it was recently revealed that Extinction Rebellion protests have cost the Metropolitan police £37 million so far in 2019; more than double what is spent each year trying to reduce violent crime in London. This has highlighted the need for alternative security solutions that local authorities can implement to protect non-violent protests, while also preserving valuable police resources.

What are the security risks?
Crowd management is the primary focus of policing at large-scale national and regional events, whether it’s a protest or a football match for example. This is because crowded events present a wide range of potential hazards, including people being crushed (against both fixed structures and one another), people falling and being trampled on, and risky behaviour such as people climbing onto structures or throwing objects.

There is also a high likelihood of illegal behaviour, including criminal damage and the obstruction of highways, along with the possibility of fights breaking out. This is a particular issue with protests, as there can be clashes between protesters and the general public.

Large groups of people are also unfortunately a potential target for terrorist activity, including hostile vehicle attacks. These attacks, in which a perpetrator deliberately rams a vehicle into a crowd of people, have the potential to cause significant casualties and are particularly dangerous as they can be very hard to predict.

As a result, large crowds of people such as protestors are not only a danger to themselves; they also put passers-by and any police presence at risk.

How are protests policed?
While recent events have been met with some frustration, with calls for the police to use greater force against demonstrators, peaceful protests are legal and can be an effective means of inspiring positive social change. The right to peacefully protest is protected under the European Convention of Human Rights (ECHR), with Articles 10 and 11 outlining an individual’s right to freedom of expression and assembly, through participation in static protests, marches, parades, processions, demonstrations and rallies.

However, while the ECHR does not protect participation in violent protests, even peaceful protests can cause serious disruption to local communities and businesses. This puts extreme pressure on police resources and leaves them to conduct a difficult balancing act.

ECHR Article 11 clearly outlines the duties of the police when it comes to maintaining public order at peaceful assemblies. They must work to facilitate peaceful protests wherever possible and maintain an open and constructive dialogue with demonstrators.

On the other hand, section 12 and section 14 of the Public Order Act 1986 do allow the police to impose conditions on a public assembly if they believe that it may result in serious public disorder, serious damage to property, serious disruption to the community, or that the purpose of those organising it is the intimidation of others.

In addition to general powers to arrest those suspected to have broken criminal law, in this situation they can issue conditions on a protest which direct where it should take place, for how long it should last, and how many people can be involved.

The police exercised these powers to restrict protests in October 2019, when conditions were put in place asserting that any assembly linked to the controversial Extinction Rebellion ‘Autumn Uprising’ had to cease by a particular date and time.

Police resorted to these firmer measures after previous conditions, which stated Extinction Rebellion could lawfully protest in the pedestrianised area of Trafalgar Square, were repeatedly breached over a nine-day period. The decision was described by the police as ‘proportionate and reasonable’, with the aim of helping them to ‘get London moving again’.

Temporary physical security
With it looking likely that we will continue to see frequent protests taking place across the UK in the coming months, the police and local authorities must work closely together to ensure the safety of all in the vicinity, while also preserving stretched police budgets as much as possible. The greater implementation of physical security solutions could help greatly in both regards.

In many cases, police and local authorities have advance warning about the location of a protest, or route of a march. In others, as in April and October 2019, they are able to restrict assemblies to designated areas and contain protestors to some extent. This makes it possible for local authorities to put in place temporary security measures, such as barriers and bollards, in order to pedestrianise the areas and help to manage crowd movement.

Previously, local authorities would not have been able to erect effective barrier systems at such short notice due to their design. In city centres, the most common type of temporary security product used to protect crowded events tended to be large, surface mounted concrete barriers. While these do not require any kind of foundation, so can be installed relatively quickly and easily, they have some significant flaws which make them far from the ideal choice.

The design of the blocks means that points of entry and exit are extremely limited, with people only able to walk through certain designated gaps in the perimeter. This severely restricts the flow of pedestrians and can result in large queues and crowds of people on both sides of the barriers. Not only does this leave any people queuing on the outside vulnerable to attack, but it has been shown that some of these blocks slide on impact, which means they have the potential to create a crushing effect that would be incredibly dangerous for those on the inside too.

Fortunately, there are now a range of temporary surface-mounted bollards and barriers available that have been specifically designed to protect crowds from external threats, such as vehicle attacks, and can be deployed by just a few people in a matter of hours.

These lightweight systems can be rented for either short-term or longer-term leasing, making them suitable for all local authorities, whether they need to deploy them regularly or on a one-off basis, and their compact, modular design means that they are easy to transport and store as needed.

The barriers are designed to allow people to flow in and out of an area with minimal disruption, which prevents the unnecessary build-up of queues and crowds. Vehicle access points can also often be added to allow authorised emergency service vehicles to gain access in just minutes in the event of an emergency. As an additional benefit, while all barriers should be physically supervised and are not a substitute for police presence, the use of barriers can reduce the number of police required.

Deploying temporary physical security measures is just one of the ways that local authorities can support police officers when it comes to securing non-violent protests. Ensuring the safety and security of all involved – whether part of the protest or not – should be a key priority, and will help to keep disruption to the community to a minimum.