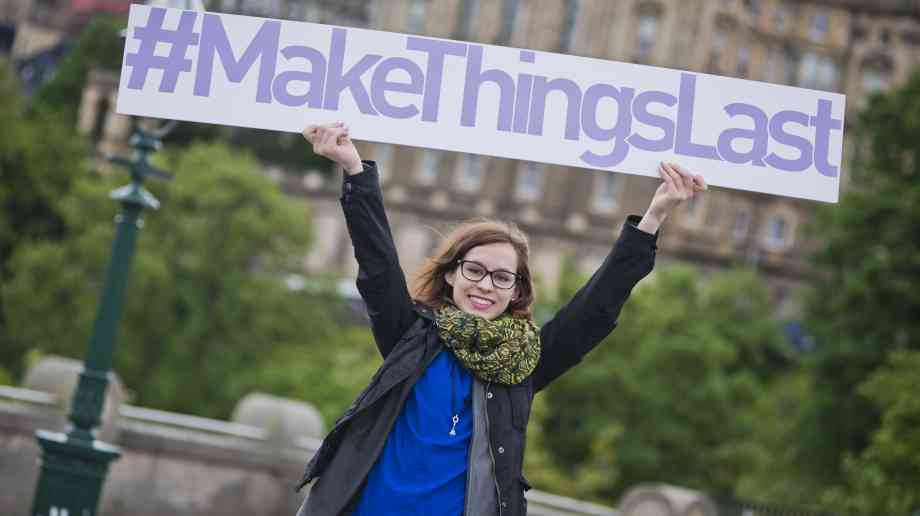 Inspiring change for the resource economy

The circular economy may be a new concept to many, but forward-thinking businesses and business leaders in Scotland have certainly heard of it. Not only that, many are already acting to make sure they maximise the benefits of a more circular economy in terms of profit – as well reaping the environmental and social advantages. In fact, Scotland is pioneering the way and was recently recognised globally for its circular economy leadership.

The Scottish Government, representing itself and its key agencies including Zero Waste Scotland, was the recipient of the Award for Circular Economy Governments, Cities and Regions at the Circulars Awards, presented at the World Economic Forum Annual Meeting in Davos earlier this year. Since then more countries have looked to Scotland as an exemplar of circular economy action. We’re not just talking about it – we’re one of only a handful of countries turning plans into deeds.

Scotland is also leading the game in terms of actively investing European funding. The EU has made a fund of £680 million available over the next few years towards supporting the circular economy. Scotland’s already ahead of the game and has a European Regional Development Fund backed programme worth £70 million, led by Zero Waste Scotland, to help innovative businesses use resources more efficiently and move towards a more circular economic approach.

What is the circular economy?
The circular economy is one that’s sustainable, and as much as possible eliminates waste. It involves minimising waste by clever design of products, keeping things in good use for longer, and maximising recycling where waste does occur. It’s about developing new business models, remanufacturing and reprocessing to create new products from old – all to keep products and materials within the economy for as long as possible. It’s being enabled by advances in technology and the emergence of disruptive approaches such as the sharing economy, typified by companies like Netflix, Spotify and AirBnB.

Above all, it’s an opportunity. We currently exert unsustainable demands on our planet’s resources, operating a ‘make, use, dispose’ culture that doesn’t get the most out of the things we already have in circulation. For example, we import millions-worth of gold into Scotland hidden away in our TVs, phones and computers, but we recover just a tiny fraction of that.

The Scottish Government has placed the circular economy at the core of Scotland’s Economic Strategy and Manufacturing Action Plan, and its Making Things Last strategy highlights priority areas with the greatest opportunity to deliver economic, environmental and social benefits. This is at a time when many countries are only just beginning to think about the circular economy, or are not working towards it yet at all.

The benefits of adopting a more circular economy are huge – in terms of investment, jobs, and the environmental benefits of improved resource efficiency and less waste. Across Europe, shifting towards a more circular economy could generate £1.4 trillion of annual benefits by 2030. In Scotland, using by-products from our food and drink sectors to create higher-value products, such as bio-fuels or advanced proteins, could generate an additional £500-800 million a year. Remanufacturing is already contributing £1.1 billion per year to Scotland’s economy and has the potential to grow by a further £620 million by 2020, adding 5,700 new jobs.

What are we doing, and what have we achieved?
The value of the circular economy can only be realised by action. By its very nature it’s all about collaboration – realising cross-sector opportunities for materials that would normally be wasted to remain in use elsewhere, and looking at ways products can be made to ensure they’re easier to take apart and fix, or repurpose.

That’s why Zero Waste Scotland and partners are working with industry on more sustainable business models that go beyond just recycling and reducing landfill. We want to generate innovative approaches to reuse, repair and remanufacture that will make the circular economy part of everyday life in Scotland for consumers and businesses.

We are making good progress. We have flourishing collaborations between business and academia going on through the Scottish Institute for Remanufacture, a centre of excellence based at the University of Strathclyde, and we’re working to increase innovation in remanufacturing. Founded in May 2015, the Institute has already seen 18 projects paired up with more under review. When it began operating it was the first of its kind in Europe, and fourth only to Singapore, New York and Beijing.

Scotland is also making great strides in the re-use sector, with two large-scale re-use and repair hubs currently operating and more in the pipeline. The Edinburgh Remakery and a second hub operated by Blythswood Care in the Highlands enable people to learn to repair and upcycle their goods, as well as purchase second-hand items. They instil skills and knowledge and create jobs at community level, helping everyone do their bit for a circular Scotland and extending the usable lifespan of materials.

In the background, Zero Waste Scotland is working together with Scottish Enterprise, SEPA, Highlands and Islands Enterprise and Skills Development Scotland, among others, on future opportunities, skills and support for the circular economy. The circular economy goes beyond business and has benefits in all aspects of society.

What’s next for the circular economy?
It’s clear that there’s real value in moving towards a more circular economy for Scotland. Just 10 to 15 years ago almost everything went to landfill. Now waste is no longer seen as rubbish – it’s a resource and we’re doing ourselves, not to mention the environment, a disservice by simply disposing of it. The challenge now is making the circular economy mainstream. Scotland is ahead of the game in terms of actions but we need circular economy thinking to be embedded across all sectors, and beyond waste management.

For the circular economy to become a regular, everyday consideration involves changes to established processes. Making it a step in procurement would be a leap forward, and could result in more companies going for ‘sharing economy’ approaches to services rather than ownership. We supported lighting company Juice to establish a sharing model for light, for example, in which it leases out lighting as a service and takes on responsibility for maintenance and repairs – much as a landlord operates when it comes to property.

In order for the circular economy to continue to progress we need to establish what the opportunities are. That’s why we have worked with the Glasgow Chamber of Commerce on a city scan to look at the movement of resources, and how these could be paired together in circular economy projects. We’re also working with partners to identify circular economy opportunities within the construction sector – another big contributor of waste to landfill but where there are numerous chances to minimise that by adopting a circular economy approach.

In terms of the next milestone, the Scottish Government has committed to a Circular Economy Bill within this Parliament. We’re expecting a lot of interest from within the sector on feeding into that, and it’ll be a key discussion point at this September’s Scottish Resources Conference in Edinburgh. We’re aware that Europe, if not the world, is looking to Scotland for examples of circular economy innovation and success, which gives us an ideal opportunity to share ideas and best practice. We’re not only pioneers, but influencers, and we’re committed to advancing Scotland towards a truly circular future that maximises the economic, social and environmental potential of sustainable resource use.