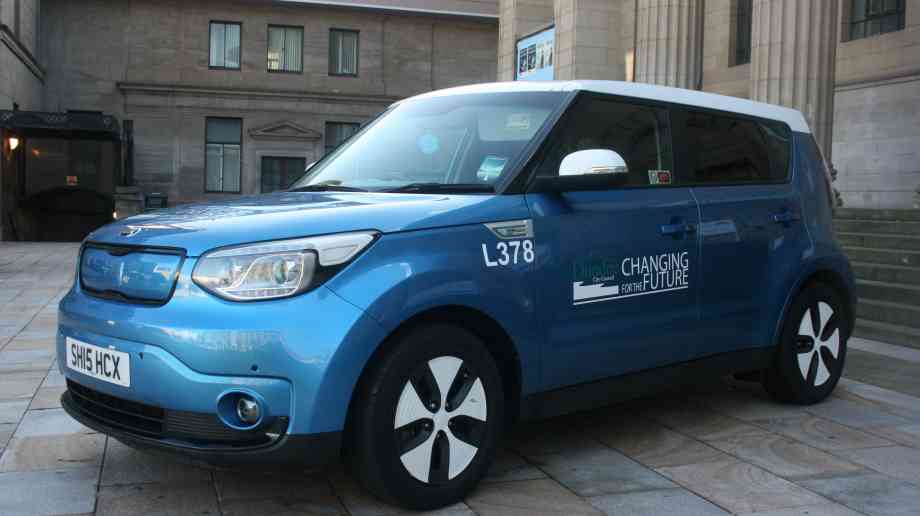 Driving towards a greener fleet future

Dundee has been described as ‘leading the way’ with its electrical vehicle infrastructure and uptake making it one of the most EV-friendly places in the UK. Rebecca Wallace, part of the 'Drive Dundee Electric' Campaign, explains why

In 2006, due to the decreasing quality of clean air, the whole of Dundee City was regarded as an Air Quality Management Area. In 2011 an Air Quality Action Plan was launched and the council installed four 7kwh chargers to power the new fleet of four fully electric vehicles after discovering that road traffic is one of the main sources of pollution that directly affects the health and quality of life for those in the city. Nobody could have anticipated the success of the vehicles. Despite the range at the time covering a maximum of 80 miles it was quickly realised this was not necessarily as much of an issue as it had previously been made out to be. The short distance between locations in the city and surrounding towns meant staff had a relatively low daily mileage, which was well within the capable range of the cars. The vehicles had ample time to fully recharge overnight, even on the slowest of charge.

Over the years the progress of the vehicles and charging technology have impacted decisions for renewing vehicles on the council fleet, which now consists of 87 electric vehicles - making up one quarter of the small – medium sized vehicles. They allow staff to travel between workplaces (also reducing grey fleet emissions), to carry out other types of work in small vans and maintenance vehicles. As a result, Dundee City has been awarded 4 ECO star rating.

It is essential to note that the charging infrastructure and fleet of zero-emission vehicles wouldn’t have been possible without the £3 million which has been invested in the city with funding from Westminster’s Office for Low Emission Vehicles and the Scottish Government’s Transport Scotland. With this help, Dundee City Council is now discovering the significant reductions in emissions and costs these vehicles bring, with over 1,000 tons less CO2 in t11he air, a 35 per cent reduction in maintenance costs and an instant saving of minimum 7p per mile.

An incentive to charge
The number of chargers the council has installed has also grown rapidly over the years. 56 chargers can charge 118 EVs at any time – many of which are available to the public. All within 20sq miles, this is one of the most concentrated network of chargers in the UK. This does not include privately-owned chargers, which brings the total to over 75 chargers in the area the council are aware of. Tesla has also installed eight of their own superchargers at the DoubleTree Hilton hotel. Charging from all Dundee City Council chargers has been free from the point of installation up to April 2018 to help reduce running costs further. This will help achieve the lower whole-life costs of an EV sooner compared to a petrol or diesel - fuelled vehicle.

An incentive to help reduce emissions in the busiest parts of the city was to provide free parking in Dundee City Council car parks for pure electric vehicles. This has been a huge success with over 350 vehicles signing up. Car parks with ANPR barrier systems recognise the vehicle and will allow a vehicle to enter car parks automatically. With potential savings of over £900 per year, some locals have bought an EV solely for this purpose. Even the smallest saving in parking costs is enough to incentivise travel into the centre by means of a zero emission vehicle. The decision to make free parking exclusive to fully electric vehicles has been controversial – especially among hybrid owners.

The council found it difficult to offer the same rewards and benefits to vehicles that have a potential to be running on a petrol or diesel engine compared to those who take the plunge and run around emission - free all the time. There is no way to regulate or police the electricity use in hybrids as some can only do 30 miles in electric before their fuel elements kicks in and heavily pollutes. This defeats the purpose of offering free parking to ensure a reduction of emissions in the city. However, any plug - in vehicle doesn’t have to pay for parking if they are charging at an on - street charger.

Drive Dundee Electric
In 2017, the council launched the campaign ‘Drive Dundee Electric’ to highlight and support EV uptake. As well as Dundee, the campaign reaches out into the neighbouring locale as there are many people who travel into the city from surrounding areas, which can easily be travelled by an EV. The campaign focused on highlighting the positive aspects of EV ownership, the local incentives and busting myths, misconceptions and anxieties that may prevent the uptake of an EV. Education around charging is essential in the campaign as it might not be initially easy for someone alien to the technology. Highlighting charge points in our area, giving demonstrations and giving people a chance to be in an EV are strategies designed to help people get familiar with the technology and normalise the idea that people are to refill before their journey rather than during it (unless travelling long distances). As people can be quick to analyse the drawbacks, promoting the short term benefits is more effective than the long - term benefits and targeting the rising fuel prices, parking costs, high taxes and interest on loans as losses will help highlight the benefits and gains of EV ownership.

Communication between the campaign and car franchises to help boost EV sales and highlight local incentives at a car purchase is essential for aiding the growth of EV sales amongst the public. Drive Dundee Electric have been present at events that include fun experiences such as the local Flower and Food Festival, Green Fleet Dundee, Cenex LCV and have also hosted a festive EV parade. This can help raise awareness around EVs in a unique or fun way which can not only be more appealing but more effective over attempting to educate an individual with statistics.

With all the EV success it is of no surprise that Dundee City has seen an 18 per cent increase in electric taxis operating in the city from September 2017 – November 2017. The number of electric taxis operating in Dundee is now 10 per cent of the overall figure. With the rapid charging hubs to be complete in a matter of months we hope to see this figure grow even more. The close engagement the council has had with the taxi industry in the city has helped the uptake considerably. It was recently revealed by statistics from the Society of Motor Manufacturers and Traders (SMMT) that the sales of pure EVs almost doubled in Dundee in 2017 compared with the year before.

Driving forward
Future plans for Dundee include continuing to develop the rapid charging infrastructure. Along with the three new rapid charging hubs, further individual rapids are to be installed at taxi hotspots. The council have also been looking into the possibility of installing V2G technology to aid the grid at peak times and exploring different charging solutions for those who cannot charge from home. This includes ambitions to refurbish a vacant multi-storey car park. There are also plans to utilise the charging hubs and transform into mini EV Experience Centres, run by car franchises and the Drive Dundee Electric campaign. The campaign will also continue to support and encourage workplaces and businesses to install their own charging network and adopt EVs onto their fleet following ambitions to host another Green Fleet event. Dundee City Council will also continue to support and work with surrounding local authorities to ensure the charging network is seamless and without boundaries throughout the region.

There are many challenges that the council and campaign face. Working with the Distribution Network Operators (DNOs) has been time consuming, infuriating and has been the cause of huge setbacks with installing infrastructure. There is also a concerning lack of mechanics that are trained in EV technology, not only in Dundee but across the country. The council sent eight of their mechanics to a course down in Milton Keynes to be specially trained in EV technology. Environment and air quality can be a topic easily dismissed as the impact has yet to be accurately put in perspective - the insidious nature of Dundee’s dirty air has gone unnoticed over generations. This makes it difficult to communicate how essential it is to change our ways. There are other issues which may be prioritised that directly impact an individual’s life such as money, public services and housing. There is more tolerance to the rising fuel prices as this has always been the norm and many do not see an alternative so will still accept it. Dundee City Council will be working to overcome issues and share experiences to help the rest of the country drive a greener and more efficient future forward.