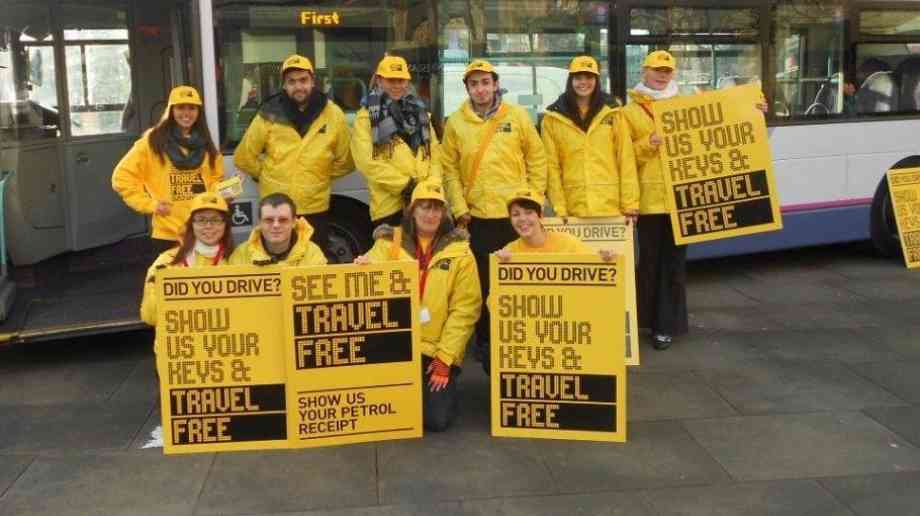 The Greener Journeys Behaviour Change Lab applied behavioural insights to develop innovative ideas that encouraged drivers to switch to the bus. Here, Isabelle Brennan takes a look at the lessons learnt, which can support industry and local government to promote a more sustainable way to travel

Responsible for up to 50,000 premature deaths in the UK per year, air pollution is a major public health challenge. Reducing the number of cars on our roads must be a central part of the solution. Cars produce 60 per cent of domestic transport emissions, which as a sector is responsible for a quarter of emissions in the UK, and whilst there has been a lot of recent advances in technology, this can only take us part of the way. Electric vehicles may emit no exhaust fumes, however they still produce large amounts of small particle pollution - for which the World Health Organisation states there is no safe limit - from the wear on brakes and tyres and by throwing up dust from the roads.

Therefore our towns and cities need fewer, not just cleaner, car journeys. Walking and cycling as much as feasibly possible is certainly critical to this, however enabling people to safely and efficiently move round cities will also require modal shift to integrated transport networks, with buses playing a large role.

The Greener Journeys Behaviour Change Lab
Modal shift is ultimately underpinned by human behaviour: it requires people to decide to take one form of transport over another. Whilst opting for the car can often be a deeply ingrained and habitual behaviour, there is a growing body of knowledge about the ways behaviours can be ‘nudged’, or influenced, to change.

With this in mind, over two years Greener Journeys and social enterprise Behaviour Change worked in collaboration with the big four bus companies, as well as charities and community groups, to adopt an unconventional approach to tackling this challenge. Experiments were run across the UK to test how applying different behavioural insights affected modal shift from car to bus.

The behavioural theory of social norms was one of those applied – the idea that we are strongly influenced by what other people do. If we see people like us using the bus, we are more likely to give it a try too. Then there was messenger theory – whether we trust and believe what someone tells us depends on who they are. If we think someone is trustworthy and knows what they are talking about, we are more likely to listen. The final behavioural insight applied was moments of change – most of the time we stick with our habitual ways of doing things, but there can be moments when a different experience knocks us off course and makes us more open to change.

The approach
In the first year of work, a series of experiments was developed to test different aspects of thinking. First, a campaign in Sheffield aimed to reach drivers when they were open to change by targeting them at a time when the irritations of taking the car were most salient. Street teams were used to engage them around negative experiences such as parking, sitting in traffic or paying for petrol and offered a free ticket to try the bus next time.

Second, a network of community ambassadors was recruited to promote bus travel to their friends and neighbours in Leicester, and three different community groups in Manchester tested how trusted messengers could be used to raise the profile of the bus within their communities.

Finally, young people in Bristol were targeted with a new online tool designed to encourage them to delay the decision to learn to drive/buy a car.

In year two, a full-scale test was conducted in Manchester to create a replicable model that could then be used elsewhere. An overarching campaign – ‘Get on Board Manchester’ – was underpinned by using street teams to distribute free tickets for trial journeys to exploit moments of change, working with community radio stations to offer highly relevant messaging to their loyal listeners and partnering with a trusted community group to engage people in their local community.

The activities proved very effective at reaching car drivers who rarely used the bus. By building evaluation into the project design from the outset, it was possible to accurately measure the percentage of those who redeemed free tickets who wouldn’t otherwise have used the bus that day. In Manchester this figure was 72 per cent, and 55 per cent of infrequent bus users who had redeemed a ticket went on to make more trips within a few weeks.

Targeting car drivers
This project was able to prove it is possible to accurately target non-bus users, and in particular car drivers, and encourage them to give the bus a try. It also enabled the development of the following principles for targeting drivers, which may prove useful to others working to incentivise, encourage and promote the bus as a sustainable and better way to travel.

1. Focus on the right moments
Identify particular corridors with good bus services into to the centre of town, base the activity around these routes and target activity at ‘moments of driving pain’, such as parking. Then encourage the trial of the bus with a free ticket voucher, using the vouchers as a mechanic to capture data about people’s behaviour to evaluate the effectiveness of the activity. It was found that the validity of the voucher affects the proportion of car drivers redeeming them; a longer time to redeem means an infrequent bus user will be more likely to find a suitable journey to try.

2. Use street teams to achieve scale
One of the most successful elements in targeting drivers was the use of street teams to distribute the trial tickets. They can achieve scale quickly, but in a low-budget and extremely targeted way. Generally, the redemption rate gained through using street teams was high, and the proportion of existing bus users was very low in comparison with industry norms for free ticket giveaways.

Using street teams also allowed the capture of valuable data for evaluation and follow up. In Manchester the teams collected email addresses on the street, enabling a survey of a control sample of 1,765 people who took the vouchers but didn’t end up using them.

Briefing the street teams to ask people to ‘show us your car keys’ proved to be the most effective way to screen for car drivers before giving away vouchers. For people who are existing bus users, distributing small gifts such as timetables and pens reduced the risk of them still asking for vouchers.

Busy ‘cost-conscious’ shopping areas near to main car parks are the best places to target with street teams, particularly in the summer when there is an increased likelihood of good weather and therefore high footfall. It’s worth noting that it’s vital that bus drivers are thoroughly briefed before and throughout the activity to reduce the chances that they don’t recognise and therefore deny the use of a customer’s voucher.

3. Work with community organisations
The project also explored relationships with a variety of community organisations. All of them offered great value in different ways, however what they had in common was that the message was being delivered by a source that people know and trust, and therefore was more likely to be taken on board.

For example, a community radio station coordinated activity with a group of local radio stations covering communities of interest and local areas, with a combined reach of over 30,000 people. This added particular value in accessing hard to reach groups that tend not to be targeted by conventional marketing for a variety of reasons such as religion, language or cultural convention. Developing these kinds of relationships also highlighted the vital social role that the bus can play for the more vulnerable parts of society.

Looking to the future
Tackling air pollution will require collective action, and these experiments have added new effective ways of encouraging car drivers to switch to the bus. The opportunity is now there for professionals from across sectors to apply these learnings on a larger scale to deliver long term low cost carbon savings.