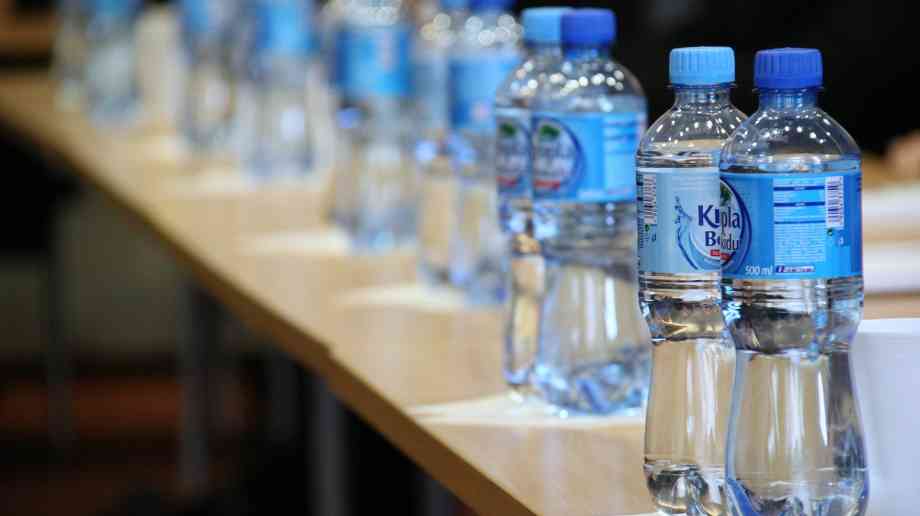 Plastic waste appears to be a problem that is not going away. With many voices joining the calls for better regulation of plastic waste and recycling, what more can the public sector do to help make Defra’s 25-year Plan a success?

At the end of February, the Environmental Audit Committee said that the government had not adequately acted upon, or responded to, its recommendations on deposit return schemes and producer responsibility obligations. Discussing figures that indicate that the UK unnecessarily uses over seven billion plastic water bottles every year, Mary Creagh, chair of the committee, warned that the government needed to do much more to combat plastic pollution, emphasising that a UK-wide deposit return scheme is ‘a crucial next step to turn back the plastic tide’.

Since then, Environment Secretary Michael Gove has announced that a deposit return scheme to increase recycling rates and reduce waste pollution will be introduced later this year. Subject to consultation, the deposit return scheme will target single use drinks containers after recognising the success of similar schemes in Denmark, Sweden and Germany. A deposit return scheme sees consumers pay an up-front deposit when they buy a drink, ranging from 8p in Sweden to 22p in Germany, which is redeemed on return of the empty drink container.

In Germany, a network of ‘reverse vending machines’ are in operation, whereby cash rewards for returning drinks containers are given without an upfront deposit. The public can insert plastic or glass bottles or cans into the machine which then returns money. Once a bottle is returned, businesses are held responsible for making sure they are effectively recycled. This has led to a 97 per cent recycling rate in Germany. The UK consultation will analyse the details of how such a scheme would work, alongside other measures to increase recycling rates.

Official figures show that UK consumers go through an estimated 13 billion plastic drinks bottles a year, but more than three billion are incinerated, sent to landfill or left to pollute our streets, countryside and marine environment.

This deposit scheme consultation announcement followed that of the government’s landmark 25 Year Environment Plan, launched by Gove and Prime Minister Theresa May in January. A Green Future: Our 25 Year Plan to Improve the Environment sets out how the government will operate over the next quarter of a century, including eliminating all avoidable plastic waste through extending the 5p plastic bag charge to small retailers, supporting the water industry to significantly increase water fountains and working with retailers on introducing plastic-free supermarket aisles.

The accompanying consultation focused on raising the standard of operator competence across all permitted waste sites by strengthening the regulators’ assessment and enforcement abilities, reforming the waste exemptions regime within the waste permitting system and the introduction of a new Fixed Penalty Notice for household Duty of Care offences for fly-tipping.

As with air quality plans, a number of London councils have been quick to implement programmes and demand change to help tackle the plastics problems. Enfield Council is the first London authority to use a trail-blazing asphalt/waste plastics mix to resurface the borough's roads, helping to divert plastics from landfill and reduce the carbon footprint for road construction. Similar work began in Newcastle in 2016. Wandsworth Council is looking at plastic use across all of its buildings with a view of phasing out all unnecessary usage, aiming to work alongside local schools, community groups, local businesses and its waste management partners with the aim of seeing a reduction in the use of plastic in the borough. Richmond has made a similar claim, promoting the switch from disposable plastic bottles to reusable bottles and cups in its buildings, and encouraging the eider community to do the same.

Outside of London, Newcastle City Council has announced a plan to ban plastics straws and switch to compostable coffee cups in its offices, as part of its response to a report by the Newcastle Waste Commission. The council, which employs, over 6,000 staff, has pledged to reduce single-use plastics by switching to wooden disposable cutlery and re-using platters and provide improved recycling points in all offices. The authority will also investigate replacing plastic cups with recyclable cups in vending machines and send householders flyers with useful recycling information.

Responding to the launch of the government’s consultation on single-use plastics, Dr Colin Church, chief executive of the CIWM, said: “Plastics have many important functions and are part of modern life – but we have to stop using this versatile and highly durable material in single-use applications that squander a valuable resource, contribute to the pollution of our environment and our oceans, and increase the cost to society of managing our waste. There is also a wider imperative to consider measures and incentives to reduce all types of waste, and make better use of recovered materials, to benefit the UK economy and the environment.”

Litter louts
At the start of this month, Environment Minister Thérèse Coffey announced that councils will be given the power to almost double on-the-spot fines for litter louts, from £80 to £150. For the first time, local authorities can also use littering penalties against vehicle owners if it can be proved litter was thrown from their car, as it has been highlighted that street cleaning cost local councils almost £700 million last year.

Clear that councils would not abuse their new powers, the government has said that authorities should take into account local circumstances, like local ability to pay, when setting the level for these penalties.

Announcing the news, Coffey said: “These new fines will tackle antisocial behaviour by hitting litter louts in the pocket, whether it’s litter that is thrown from a vehicle or dropped in the street. Littering is a scourge on our environment and we waste taxpayers’ money cleaning it up – funds which could be better spent in the community. We want to be the first generation to leave our environment in a better state than we found it, and I encourage everyone to take responsibility for their litter and recycle more.”

The new powers are likely to pave the way for more councils to award higher attention to littering in their towns and cities, following in the footsteps of large city regions like Newcastle. Following an 11 per cent drop in satisfaction with street cleaning over two years, Newcastle City Council revealed in February 2018 that a £1 million clean-up of the city was to take place, sweeping the streets, picking up litter, removing dog mess, erasing graffiti and cutting-back overgrown shrubbery. A recent Residents’ Survey in Newcastle highlighted that 57 per cent of people said clean streets were the most important thing in making neighbourhoods a good place to live.

That opinion has also been the catalyst for Manchester City Council and Keep Britain Tidy collaborating to make Manchester the UK’s first ‘Tidy City’ by 2020. The ‘Keep Manchester Tidy’ campaign is the first formal partnership between a UK city and the Keep Britain Tidy charity and hopes to be a trailblazer for a national network of ‘Tidy Cities’ in the future. It aims to create a cleaner city, with better parks, green spaces and waterways, which recycles more and plays its part in limiting the impacts of climate change.

The agreement will involve public sector organisations, businesses, schools and residents’ groups working together to tackle littering in all its forms, with the initial focus for activities being on reducing littering, dog-fouling and fly-tipping. An independent taskforce will also be formed, with local organisations and businesses invited to get involved to make their contribution to keeping Manchester tidy.

Nigel Murphy, executive member for Neighbourhoods, said: “We know how passionately our residents feel about the fight against littering and how proud they are of their neighbourhoods. We’re committed to playing our part, by making sure our streets are cleaned and our bins are emptied. However, we need as many people, businesses and organisations as possible on board, which is why we're so excited about the launch of this ground-breaking new partnership with Keep Britain Tidy. By bringing everyone together, we know that we can make a real difference and not just make Manchester tidy, but Keep Manchester Tidy.”

Profitable waste solutions
As part of out Top 10 series of articles last year, Government Business analysed the state of local authority green policy, and the examples of leading recycling management and efficient, effective waste management policies across the UK. Published in July 2017, South Oxfordshire District Council were highlighted as the leading local authority in waste innovation and recycling improvements, finishing above West Sussex County Council and its neighbouring Vale of White Horse District Council, who completed the top three.

Statistics released by the Defra at the end of December 2016 showed that the rate of household recycling had fallen to 44.3 per cent, from 44.9 per cent the year previously, leading to calls from the waste industry for a fundamental review of the funding for council waste services and for concepts such as Extended Producer Responsibility and Direct Charging to be explored and implemented. However, the same data highlighted that South Oxfordshire District Council had maintained its lead as England’s best recycling council for the third year in a row. The council had a recycling, reuse and composting rate of 66.6 per cent for 2015-16, which was significantly higher than the UK average. Earlier in 2016, South Oxfordshire District Council was recorded as recycling 67.3 per cent of household waste and was highlighted as an exemplar for the 73 councils that had met or exceeded 2020 recycling rates.

Having produced 50,000 tonnes of household waste, South Oxfordshire District Council recycled 64 per cent of their waste in 2017, while the Vale of White Horse District Council recycled 63 per cent of its waste in 2017. Together, the two councils also launched a brand-new smartphone app at the end of last year to provide readily-available waste collection information to residents free of charge. Called Benzene, the app tells residents about bin collections, collect disruptions, as well as what bin their rubbish goes in to help simplify and encourage residents.

Charlotte Dickson, cabinet member for waste at the Vale of White Horse District Council, said: “The app is so easy to navigate and will save residents time by having all the information needed right at their fingertips, especially the changes to collection days around bank holidays.”

Meanwhile, briefly referring back to plastic pollutions, neighbouring Cherwell District Council in the north of Oxfordshire, has pledged to be ‘a leader in the fight against plastic pollution’, with council members rallying round a motion warning of the dangers of plastic pollution and committing to a campaign to reduce it. As part of the campaign, Cherwell will review its use of plastic during its day-to-day procurement activities and to work towards minimising its use of non-recyclable materials. The council will also be launching a publicity campaign to increase awareness of the problem to the wider community. Cherwell is also set to consult with town and parish councils to investigate the possibility of installing water fountains throughout the district, as a result of the Refill Bicester and Banbury campaign, which aims to reduce consumption of plastic water bottles.