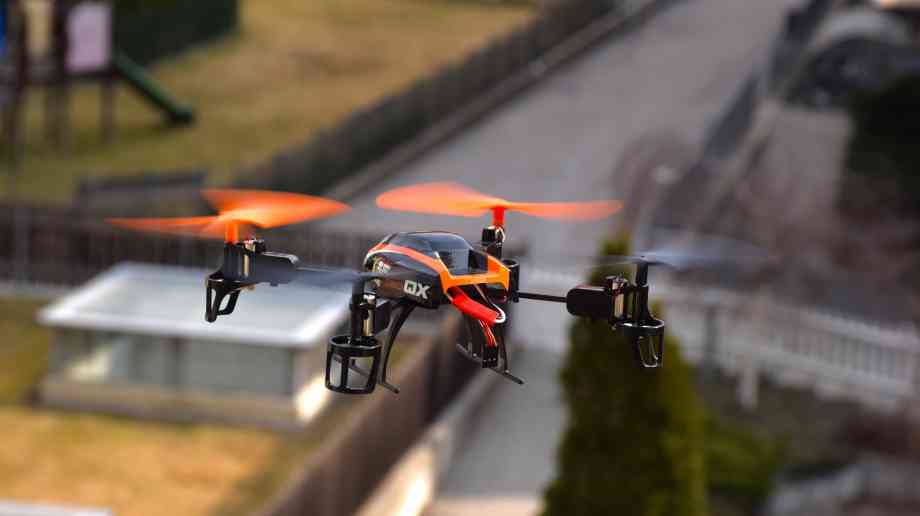 Changes in the Drone Economy 2018

At the start of the year, ARPAS-UK wrote an article for Government Business about UAS in government and public services. Here Elena Major outlines some of the developments in the industry since then

Since January 2018 another 1,235 companies have registered with the UK’s Civil Aviation Authority, which grants permissions to operate commercially in the UK. PwC published a report in May announcing a £42 billion increase to GDP by 2030 due to UAVs, the Department of Transport has revealed legislation changes coming into effect in July 2018 and there have been two notable projects running: the Nesta Flying High Challenge involving five UK cities and Operation Zenith, based at Manchester Airport.

Regulation changes
At the end of July 2018, new laws came into effect restricting drones from flying above 400 feet and within 1km of airport boundaries. Drone users who flout the new height and airport boundary restrictions could be charged with recklessly or negligently acting in a manner likely to endanger an aircraft or any person in an aircraft. This could result in an unlimited fine, up to five years in prison, or both. Users who fail to register or sit the competency tests could face fines of up to £1,000. As of November 2019, drone users will have to register and take online safety tests to improve accountability.

Economic report
In May 2018, PwC released a report highlighting drone technology could increase UK GDP by £42 billion by 2030, broken down by sector. They estimate there could be up to 76,000 drones in our skies and up to 628,000 jobs in the drone economy, bringing a further £16 billion of cost savings too. Pretty impressive numbers but will they materialise?

Two projects that have taken place this year, the Nesta Flying High Challenge and Operation Zenith, will have enormous impact on the direction of UAS developments and form the next steps in achieving the £42 billion.

The Flying High Challenge focused on five cities: each city then selected a socially beneficial use case in order to explore their technical, social and economic aspects. These were medical delivery within London, medical delivery across the Solent, traffic incident response in the West Midlands, fire response in Bradford and construction and urban regeneration in Preston. It featured a number of workstreams looking at the technical, economic and social feasibility, key stakeholder engagement, industry and research mapping, systems research and public impact analysis. 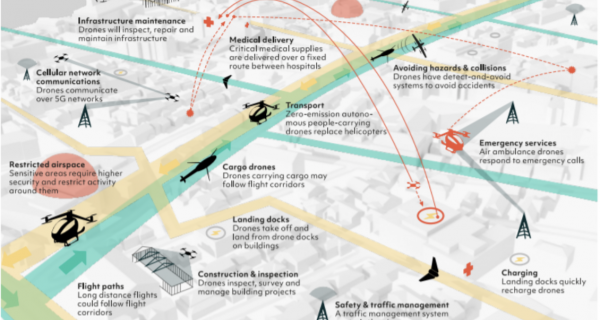 This diagram illustrates well many of the challenges facing the integration of drones into our cities. Currently drones aren’t allowed to fly within 150m of people and buildings (congested areas). Companies can apply to the CAA for an Operating Safety Case (OSC) to bring the proximity limits down.

When it comes to traffic management, drones flying automatically and beyond the visual line of sight of the mission controller are going to need a completely new approach: new rules but also new services to manage traffic, prevent accidents and stop misuse, taking into account drones of different weights, sensors and levels of autonomy. Currently drones are piloted by people, and described as ‘unmanned’. As yet, there is no regulatory framework that permits autonomous operations.

Southampton aims to become the first city in the UK to host a complex unmanned traffic management system to enable complex drone usage. However, congestion in Southampton is already having a detrimental impact on air quality, social mobility and the local economy. Southampton City Council expects a population increase of over 13 per cent in the next 20 years, meaning traffic congestion will only worsen unless interventions are made. Drones offer a flexible and agile method of collecting data, and can also be used to track traffic flow real time responding to local conditions at the time. In the near term, drones can assist with monitoring conditions, collecting transport data to assist with realtime traffic management and longer term planning initiatives.

Construction, surveys and inspections from a health and safety perspective
Drones are currently being used for a broad range of purposes across different industry sectors: Costain use drones for inspections at Hinkley Point C Nuclear Power Station, saving 50 per cent of costs compared to the use of helicopters or human inspection teams; the inspection of a wind turbine typically costs around £1,000 per tower. Performing the same inspection using a drone cuts the cost by around 50 per cent; and Network Rail are using drones to improve track maintenance and boost field worker efficiency, whilst reducing the amount of work at height required on Network Rail’s assets.

In Fort Worth, USA, drones have saved four months of meeting time over 2.5 years and 25 per cent of rebuild costs during the construction of 14,000 seat, multi-purpose Dickies Arena, while at the same time as engaging the community in the building process. Utilised as enhanced platforms for BIM, 3D mapping, progress monitoring, documentation, and inspection tasks, the drones greatly reduced operating times while optimising workflows throughout the construction phase.

The health and safety benefits of using drones cannot be understated and when matched with cost savings, there is a forceful argument to incorporate them into all construction, asset inspection and surveying companies. Sending a person to inspect to towers, oil rigs, wind turbines, roofs – both internally and externally, railway lines, wells, sewers and other hazardous environments still happens: but a drone can access places that are hard to reach and with caged drones on the market now, can get even further as well as providing protection from rotating blades. Drones have the potential to be sent into one-way environments too. Send a drone in to a hazardous environment that is streaming the data back as it flies and while the drone may be lost at a small cost, the back up team can be acting on the information and no person is put at risk. This has huge implications for environments involving fires, radiation and chemical accidents.

Operation Zenith
This is the programme of live demonstrations on Air Traffic Management (ATM) and Unmanned Traffic Management (UTM) integration in controlled airspace. It was showcased at Manchester Airport on November 21st and was live streamed to the Royal Aeronautical Society in London. It was a project run by Altitude Angel, NATS, Manchester Airport, with delivery partners Frequentis, uAvioni, DJI Callen-Lenz, the Universities of Southampton and Manchester, Paul Fassam Geomatics, the National Police Air Service, Consortiq, Vodafone, Dedrone and Heliguy.

It took what the industry envisages the airspace will look like in 20 years and worked out how possible that is now given current regulations. It featured cooperative and uncooperative traffic, demonstrating integration with ATM, covering eight scenarios: on airfield delivery of parts; runway threshold inspection; BVLOS ‘Linear Infrastructure’ Inspection of Network Rail’s lines; Atmospheric Survey at high altitudes (VLOS); Commercial VLOS Operation; Site Survey VLOS; Safeguarding (Police Search & Rescue exercise); and Airspace Management. It was a live event with a focus on multiple events happening concurrently as will be the case. The assessment of the day is still ongoing but will provide a framework for further developments.

The ARPAS-UK website has a ‘Find an Operator’ feature, enabling the searcher to select a drone operator by skillset as well as location. Our members expertise is broad, from working on Hollywood films, to industrial inspection, event photographer, training, insurance, software and hardware manufacturers. ARPAS-UK was founded in October 2013 and influences the direction of the industry by being involved at all levels, from government, the regulators through to the operators.

Taken all together, this means that government needs to support local councils, who in turn will need to be forward thinking and working with the drone industry. They can use drones for inspection of council owned and run properties, monitoring traffic, delivery of medical supplies to hard-to-reach places or in the case of natural disasters. There will be the Blue Light services, private companies and recreational flyers too within the airspace. It’s going to be busier than ever: it’s time to work together and engage with the public.